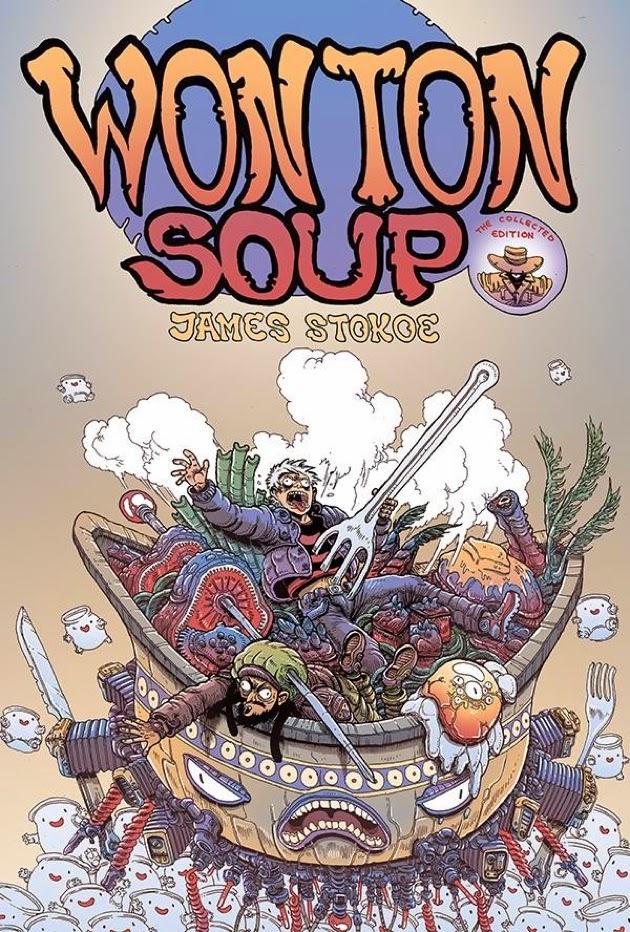 James Stokoe reminds me of Brandon Graham and it's easy to see why. They both share the same pornographic humor, they both like to label things and create lists of made-up alien things. They both like detail. Of course, they're also well known to each other and worked together. Stokoe has done some pages of Prophet in the past which if you didn't know, is written (and sometimes illustrated) by Brandon Graham.

Won Ton Soup was originally released in two separate volumes, one in 2007 and one in 2009. July 3rd of this year marked the release of the collected edition. All 397 pages. The story is all in good humor (or bad humor depending on your tastes) and centers around Boyo, a travelling space chef who dropped out of the most prestigious chef school in the galaxy to travel space. He claims to be cultivating his pallet and knowledge of inter-planetary cuisine. The first volume of Won Ton Soup basically makes fun of the Iron Chef television series as Boyo gets involved in a cook-off with alien twins who challenge him for the title of top student placement in his old school. There's even a parody of Iron Chef host Takeshi Kaga.

While the first volume focuses on Boyo and his chef problems, the second includes a ridiculous back-story about his travelling partner Deacon. I can't spoil it for you but needless to say you might be completely grossed out and laughing your ass off at the same time. I know I was! In other words there's really not much (if anything) to take seriously about this book. There are lots of funny alien creatures, oh and giant tongue alien that serves as judge in the final cook-off! Plus you will probably recognize a penis alien or two.