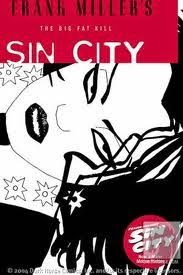 Another oldie but a goodie I chose to write about. I've read this one a couple times but I stumbled on a copy on the cheap at Monster comics. It was a sweaty day and I had to force myself out of the house. Finding cheap comics is my specialty... mostly because I'm cheap.

Sometimes I have a hard time reading Sin City. Mostly because of all the abuse towards women. The Big Fat Kill is one of the books that begins kinda like a domestic abuse revenge story. It can be hard to read. The script that falls out of the mouth of Johnny Boy is textbook classic abuse. It's disturbing how accurately Miller wrote Johnny Boy. He blames his victim for his abuse. It can be difficult to read. Although he is punished for his crimes I've always had a bit of an issue with revenge. However, I choose to see the death of Johnny as defense because let's face it, some people do not know when to stop. That being said this if fiction and I don't believe in murder whether a judge approves it as justice or not.

ANYWAY.... I still really like this book because the ladies of old town. I like the idea of these ladies keeping their own laws away from pimps and corrupt police. This is one of the reason why I still find Sin City as a female friendly book. You may not approve to prostitution but Sin City is a dangerous place. Better to be self sufficient. Guess what? In reality women all over the world feel like that. These women look out for each other in a world that refuses to look out for them. I wish this country would take care of our sex workers. sigh.

Wow I just got depressed. That can happen after reading Frank Miller books. Of course, you can now buy the entire collect edition of Sin City in the Big Damn Sin City book that recently came out to help promote the movie for A Dame To Kill For. I suggest that if you have 70 dollars to throw at it. Of course, you'l have to read it over a desk because you're not holding that thing up in bed.
Posted by The Frog Queen at 11:22 AM