Hello Comic Book Junkies and thank you for watching another awesome comic book creator interview. Today's interview is with Katie Skelly where she makes a special announcement, the first announcement ever about her upcoming book! Please check out the video to hear all about it! Katie's Website & Social Media: http://www.katieskellycomics.com http://www.instagram.com/skellyskelly... https://twitter.com/nurse_nurse
Posted by The Frog Queen at 7:13 AM No comments:

Another Wednesday, another new comic book series hits the stands. Today marks the release of a new comic book series released by Titan Comics in celebrations of the 50 year anniversary of the British television show THE PRISONER co-created, written and directed by Patrick McGoohan of Scanners and Braveheart. The television show first aired 50 years ago today in 1968. This series is brought to us in a modern light by non other than Peter Milligan (X-Statix, The Mummy) and illustrated by Colin Lorimer (The Hunt, Harvest). Titan Comics also presents us with an amazing cover from Mike and Laura Allred, what better way to celebrate?

Naturally as this is written by Peter Milligan, I'm reading it so that means you better keep your eyes peeled for an interview with Mr Milligan on my Youtube Channel next week. For now you all will have to be content to watch the series trailer released by Titan until you hit your local comic book shop.

The original television series was sold and marketed as a spy thriller but was heralded for it's counter-cultural themes and surrealist setting. The physiological drama which combined elements of science fiction focused on a spy's imprisonment within a small village resort where people were known only as numbers. Milligan's story takes an updated approach and launches us further into the future rather than the past. How far into the future we cannot be sure as we follow an operative named Breen in the 21st Century, where global currency is no longer oil or gold. Information is now the source of all power.

Issue one of THE PRISONER is in stores today so don't think I'm going to be including any spoilers in this article! I feel I've already told you too much!! You're going to have to hit your local store to see what direction this story goes but I know you will not be disappointed.

Posted by The Frog Queen at 8:07 AM No comments: 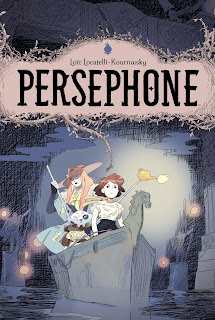 In stores this May is a graphic novel I've been greatly anticipating called PERSEPHONE by Loïc Locatelli-Kournwsky from Boom Studios & Archaia. The story "follows a young girl whose search for truth about her identity leads her on a journey deep into the Underworld". Here is your first look at the inside art. 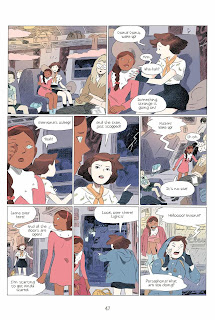 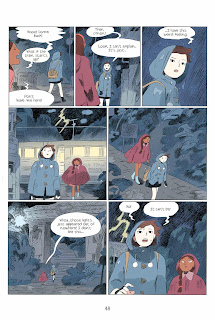 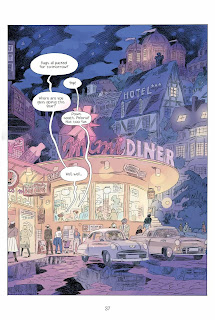 Posted by The Frog Queen at 5:56 AM No comments: 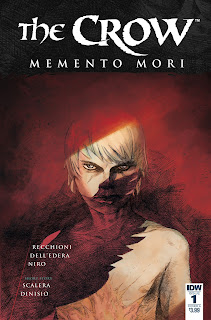 There's nothing quite like beginning a story by quoting the Old Testament. I quite enjoy Exodus myself but mostly because I do think that god is a more probably god, I mean a definite complete sadist. I'm of course an atheist if you have never picked that up from my articles. If I was a Christian I would be very much an Old Testament, god fearing lady because that is the most realistic version of god (Yahweh) unfortunately.

I have been a fan of The Crow series for well over two decades. It was one of the first comics I read, my grandmother had got a giant box of comics at a local garage sale and I would sit and read them. The first Spawn books were among them along with a lot of Conan, my parents didn't realize that comics weren't all for children. I was thrilled. So this is a new Crow story which revolves around a dead alter boy so at least the intro of bible quotes is appropriate and not just there for pretentious  drama.

So if you've read the original Crow comic or even watched one of the many movies, then you already know the format. Man dies, man comes back to reap vengeance against those who have murdered him and his loved ones. Unfortunately there's no deviation here, a man is dead and so is his lover. Another story with women as plot devices rather than characters. Yay. 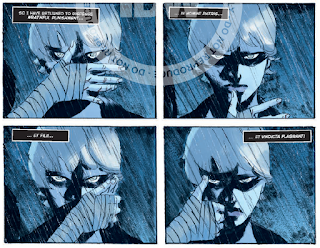 Throughout the book however there are copious panels which both make you feel the distance the narrator feels from the living world, a constant observer but also mixed with panels that feel very intimate. You look at the narrator as if looking into a mirror. I can't help but feel an affinity and emotional understand of him despite his situation having NO possible resemblance to my own. I really enjoyed the artwork, the coloring was appropriate and the characters were distinguishable.

However, politically I do not like this comic. The first moment of vengeance is reaped in issue one by a white Christian onto an Islamic seventeen year old who is of course one of the people involved in the bombing. Anything that vilifies Islam in favor of Christianity tends to turn my stomach. I really hoped this would be a vendetta against the Churches of Rome, not another religion. I was more impressed with issue two where Christianity isn't looking so hot and the father of the church is looking a very likely target for vengeance.

I also want to mention that these issues felt short. VERY short in fact. I counted both issue one at 20 pages and issue two at 18 of actual content. Each issue has a preview of an upcoming IDW comic which takes up a significant page count.
Posted by The Frog Queen at 5:40 AM No comments:

Today I'm talking to Sloane Leong about her new Image Comic book series PRISM STALKER. You can get both issue 1 & 2 in stores today. Issue 3 is available May 9th.

If you haven't, please check out my review of issues 1 & 2 here: 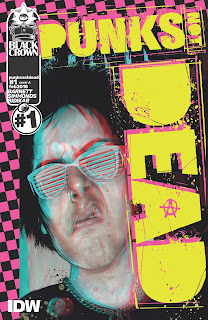 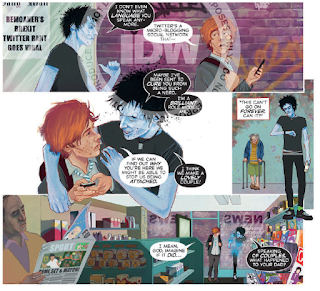 PUNKS NOT DEAD hits a comic book shelf near you APRIL 18th.
Posted by The Frog Queen at 10:18 AM No comments:

Hello! Today I'm reviewing Image Comics' THE REALM VOL 1 by Jeremy Haun and Seth M. Peck. Also, I've been streaming on Twitch so check me out over there!

Follow me on Twitch! http://www.twitch.tv/thefrogqueen
Posted by The Frog Queen at 5:50 AM No comments: