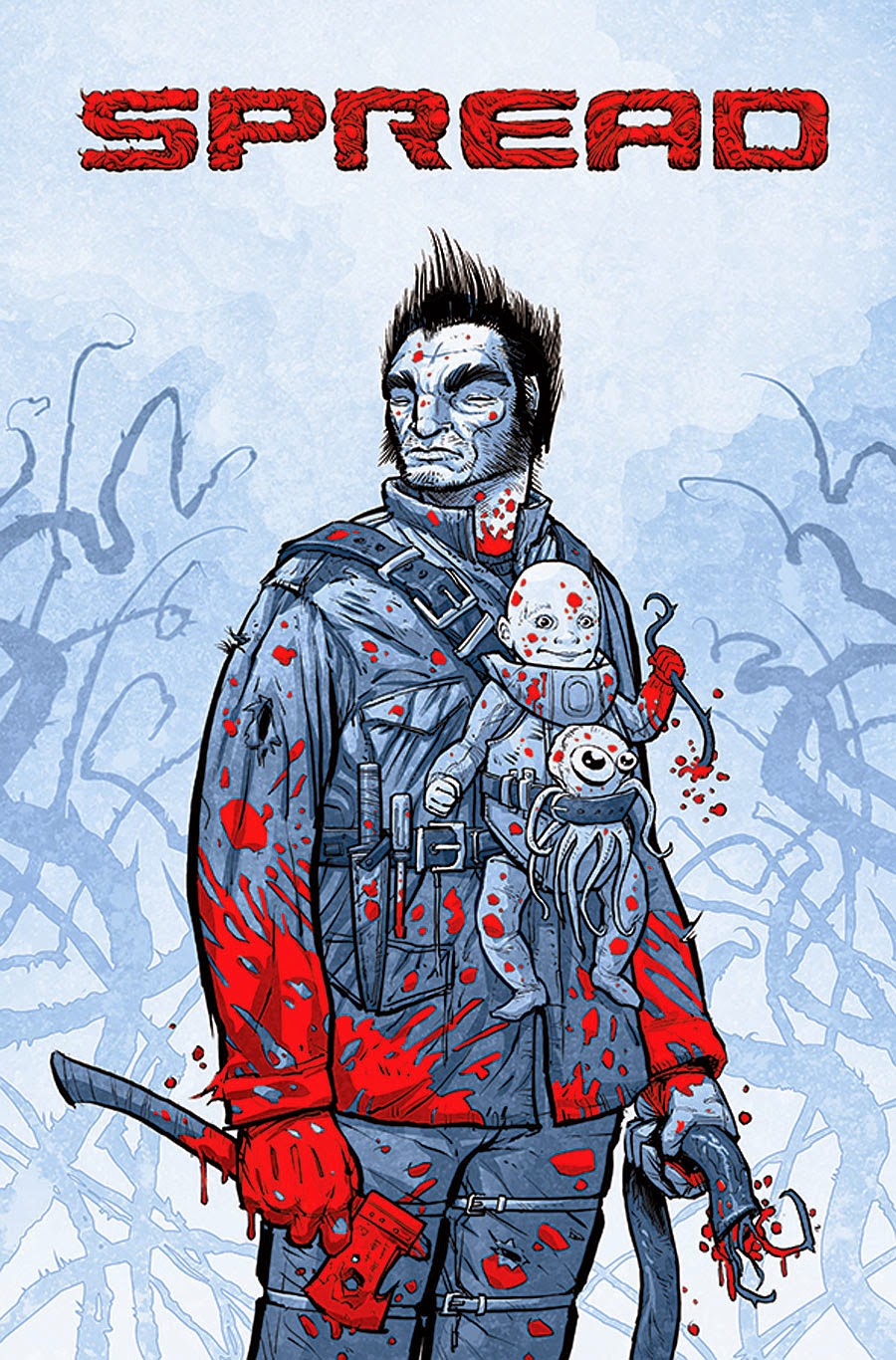 Strahm may have made it into my new favorite artists list, not that he's new. He's just more-so newly on my favorite artist list. Heh. Strahm has had various gigs with IDW, Boom and Image. Among the titles you can find Hack/Slash, We Will Bury You and the Coheed and Cambria title Keeping Secrets of Silent Earth. (For those of your less into music and more into just comics, Coheed and Cambria is a progressive alternative band that created comic books to accompany their music; or music to accompany their comic books depending on how you look at it. Their albums tell stories which the comic books also relate.)

So let's talk about Spread. Apparently, this issue has sold out on the distributor level. Always fantastic for a first issue but not unheard of. Image has trend of selling out of debut issues and then not selling any in succession. Here are my thoughts: I love the coloring, love the alien-esq beast known as the spread with all it's red tentacles. The imagery within this comic book is outstanding. Strahm's action panels grab the eye's attention and the minds fear. It's really Jordan's story that troubles me. There is a striking lack of originality and seems a bit rehashing of the typical post-apocalyptic story where one survivor is in charge of a young person's life. I am reminded of Sweet Tooth here among a wide variety of novels and movies. The Road, 28 Weeks Later to name a couple. I even started thinking about the X-Men's Hope who helped bring mutants back into the world and finally, I started thinking about Brian K. Vaughan's Saga. Why Saga you ask? Spread is narrated by this little baby known as Hope, who you get the impression, grows up to save humanity since you know -she's narrating the story.

So while I found the story ultimately entertaining, and the script well-written, I did feel as though this was a little of the same old-same old. When you keep getting that familiar feeling while reading a story you kind of wonder. I am one of those people who can be faulted with constantly seeking something new and exciting. At the same time, I can appreciate a well-told story even if the plot is a re-hashing of stories I've heard before.

I haven't had the pleasure of reading much of Jordan's work although I am familiar with Dead Body Road, Shadowman and of course the Green Latern. If anyone wants to send me review copies, I will of course read them but let's just say, I have a limited budget and his work isn't exactly on my hit list. That being said, I will be picking up the second issue of Spread. I've fallen in love with Strahm's work in this issue and I think Jordan can tell a story well, I just hope that the plot develops more original ideas and events.
Posted by The Frog Queen at 4:32 AM