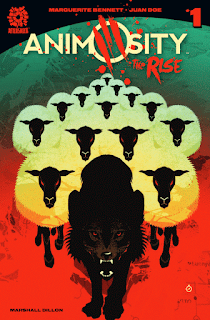 Hilariously, this is a book I didn't expect to have a connection with. I chose it simply based on the cover. I do that sometimes. Well of course I know who the writer is, Marguerite Bennet is not without notoriety. A story about all the animals taking back the world, literally talking, working together and killing resisting humans. The only humans spared are the ones that cared for animals in the first place. Do you think the vegans got spared? That part of the animal agenda wasn't revealed in the first issue unfortunately.

Animosity: The Rise is a one shot from the comic book series Animosity which starts in Aug 2016. Although its described as a one shot, they've attached an issue number which always makes me suspicious. The series is currently resting at only issue #4.

I think it's the first Aftershock book I've ever read from AfterShock Comics, an independent comic book label formed in April of 2015. Marguerite Bennet is the talent responsible for many a DC book. She's been a writer on series such as Batgirl, Earth 2: World's End, Superman:Lois Lane, DC Bomshells, and not to forget a bunch of Marvel titles, releases with Image Comics, Boom, Archaia, IDW, the list is quite extensive.

I've actually read a lot of her books so I have to say this feels like a departure. That's what happens when writers get to create. AWESOMENESS. It's not a new concept but its a bold story. Animals rebelling against humanity, creating a new world. People don't take kindly to such stories. Too ridiculous, too unbelievable, somehow it's a story about a man  leaping over tall buildings is more believable but I digress. I really like the concept of the series. It feels  kind of vegan whether it was intentional or not. This issue also reveals the intentions the animals have for what's left of humanity. I won't spoil it. I myself, have yet to read the first 4 issues as I only just established a relationship with Aftershock comics and I am just discovering their books now.

Animosity: The Rise is available now in a comic shop near you! I'm thoroughly pleased with it. The artwork is fresh and has a sort of minimalistic quality. I quite enjoy. There's also a variant cover available from Mike Rooth whom I had the pleasure of meeting at Hal-Con this year.  And you can expect to see issue #5 of Animosity hit shelves this February.
Posted by The Frog Queen at 4:52 AM No comments:

Posted by The Frog Queen at 7:13 AM No comments:

Posted by The Frog Queen at 5:20 AM No comments:

Thoughts on the World of EDENA

Posted by The Frog Queen at 7:19 AM No comments: