Posted by The Frog Queen at 8:37 AM No comments: 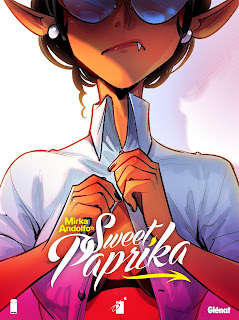 Image Comics recently announced that Mirka Andolfo's latest comic book series is coming to the North American audience in 2021! SWEET PAPRIKA can be expected sometime in July and I'm already salivating. These adorable images have been posted all over her instagram and teasing me for at least a year.

Image has described this new series as a "sexy rom-com" and a "Bridgey Jone's Diary meets Sex And The City with a twist of The Devil Wears Prada". This descriptions feels very true to some of the more adorable moments in Andolfo's earlier series UNNATURAL.

The synopsis from the publisher:

Paprika, a young woman of Italian origins living in New York, is a workaholic: success has sucked up her life, making her forget the importance of time for herself and for her loved ones. To bring havoc in her life will be Dill, a naive and handsome boy with an “angelic” otherworldly attitude, who will push the young woman to question herself and help her regain confidence in herself and in men. Their totally opposite characters and lifestyles will give life to fun and irresistible stories, seasoned with a pinch of eroticism.

SWEET PAPRIKA isn't currently ready for pre-order so I regret to inform you that I do not have a diamond code to share but I couldn't be more excited that we'll be seeing this series next year, which is very much around the corner.

Posted by The Frog Queen at 5:25 AM No comments: 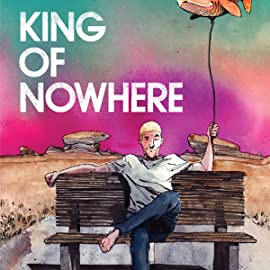 The time has come for me to get back into written comic commentary. I've had a little over a month away from all comic reviewing while I focused on twitch gaming but in all that time of course, I have continued to read comics. Recently I was able to finish reading KING OF NOWHERE. So let's talk about it shall we?

Boom Studios released issue 1 of King of Nowhere in March of this year, at the beginning of the Canadian Covid epidemic. The series survived the first wave of lock downs and comic downsizing and completed it's 5 issue run in September. (Me being a wee bit behind on picking up my comics, I only got to recently read the conclusion.)

The series was written by Eisner Award Winner W. Maxwell Prince and illustrated by one of my favorite illustrators Tyler Jenkins whom you would most recently remember from his Eisner nominated series GRASS KINGS. If you have been following this blog for any length of time you are likely well acquainted with his work as I've covered most of his projects.

KING OF NOWHERE follows lost drunkard Denis who winds up in strange small town after a particularly enthusiastic bender. He has no memory of how he got there and begins to question his sanity and sense of reality as he is met with the locals. The town Nowhere is inhabited by fish people, bird people, talking trees and mutants of all shapes. As Denis deals with each one the reader is left to wonder if in fact he is on some terrible drug trip or if the reality of the store has shifted into another world. I could perhaps describe the story as a daydream with a little sprinkling of delirium on top for taste.

For me, the artwork trumps the story as I am very partial to Jenkin's lovely water color. It feels like a fever dream all on its own. The finer points of the story itself rests in the subtleties. There's a self loathing and wanting need to be better-than in the main characters which gives NOWHERE its charm. There's a taste of the struggling addict in every issue which humanizes the characters, which is kind of hard since some of them look like fish. Yet its these intrinsic faults displayed to the reader which imparts more impact in the story than the overall plot which focuses largely on small town conspiracy and government crime. While those things offer some adventuring, it is the journey Denis experiences in questioning his own reality that really drives the whole story (for me).

I definitely recommend grabbing this one!  If you're unable to make it to your local comic shop, you can grab this series on Comixology of ask Santa to get you the trade for Xmas as it comes out Dec 9th!

Posted by The Frog Queen at 3:23 AM No comments: