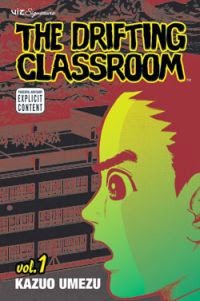 You may remember my review of The Cat-Eyed Boy. It consisted of two large volumes printed by Viz and were created by Japanese manga author & artist Kazuo Umezu. The Drifting Classroom was originally published in 1972 and in 1974 won the 20th Shogakukan Manga Award in the general category. It has received much acclaim over the years and even made it as a movie or two. I had never read it but as a lover of horror and psychological thrillers, I knew I had to get my hands on this series. So I ordered it online because let's face it, this wasn't going to be sitting on the shelf of any of my local comic book stores.

This story is about an entire school that appears to have been transported to another location and perhaps another dimension. The students and staff look out their windows to a barren wasteland and not a shred of their town anywhere else to be found. To make matters worse, leaving the school grounds means certain death. None of the people within the school have a concept of what is happening. Their phone lines are dead and the electricity is gone. As far as anyone can tell, the rest of the world has simply, disappeared.

As with Umezu's other work, there is a lot of child abuse. Children are slapped by adults who can't seems to control them in any mature way. There's even a scene where a teacher cuts his own child with a piece of glass. Even though the situation these people are faced with is chilling and their future uncertain, it's the interaction between characters that remains more disturbing. Umezu brings out the worst in human nature. It's as if none of his characters possess the ability to control their emotions in any situation. Although most people can control their mouths in the face of outrage, or worse, Umezu's characters cannot. It's only when they stop for self reflection much after the fact, that the characters become more dimensional and real. At first you just think everyone is nuts, extremely self-centered and unbalanced.

It's safe to say that mystery of The Drifting Classroom has captured me and I must order the rest of the series.... STAT! If you've read everything from Ito and need a replacement, check out Umezu. He's not Ito but he has his own way of pushing your suspense buttons. 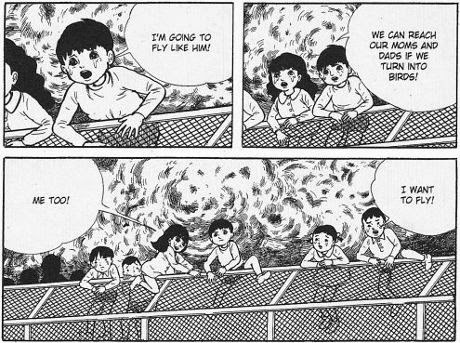