Eye of Newt #2 by Michael Hague 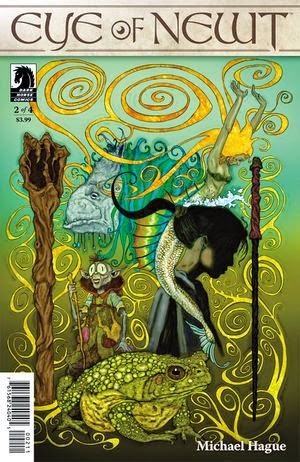 The story of Newt continues on. Together with Morgan Le Fey, he encounters all kinds of mystical creatures. Of course fantasy stories aren't complete without trolls and goblins.  Although, these trolls are nice and helpful. So are the giant talking frogs. Morgan however, is kinda of well.... annoying. Horribly annoying and negative. She really doesn't have any redeeming qualities but she's really strong and knows what she wants. She's just not a real good conversationalist because she's always insulting people. She's forceful, but she knows what she's after.

66 year old Hague has had a very extensive career. Titles he is credited to have illustrated include The Wind in The Willows, The Hobbit, The Wizard of Oz and about 70 more. This is his first graphic novel ever, to be released as a four part mini series. This beautiful story is suitable for children and I think you should go buy it for your kid... like right now.