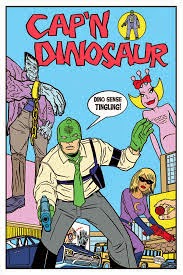 Another fun and colorful throw back from Shaky Kane. WARNING. This comic contains absolute silliness!! The Superhero team consists of Honey Moon and Cap'n Dinosaur! Yeah that really doesn't explain much does it. Well their powers are even more in the realm of the unexplained. Honey Moon's mysterious powers are linked to the lunar cycle.. and you know what else is linked to the lunar cycle... Cap'N Dinosaur has the power to enable his dino brain which apparently craves raw meat. So raw that he just wants to eat people who are walking around alive...

In an interview with Geeks Unleashed, Shaky Kane admits that he took Cap'n Dinosaur from a couple shorts he wrote over 15 years ago.

You'll notice a lot of familiar looking characters from the advertisements that were in comics and magazines you read as a kid. Well I suppose that depends on your age. Remember sending away for sea monkey's in the mail? Remember little do-dads with your favorite monsters on them? The Wolfman, Frankenstein monster, and Sputnik?? lol.

Besides Shaky Kane, you'll find the other credits a bit more difficult to track down. KEK-W is also known as Nigel Long. I really have only been able to find information on him through a page online about 2000AD writers. He is credited in over 70 issues. As for Komikraft I got tired of digging. Yeah I know I get lazy sometimes.

I'm a really big fan of these one-shots from Shaky Kane. His work makes me smile. We all know how much I loved his last one-shot That's Because You're A Robot. I only hope he continues to generate them as regularly as he has. At the back of this issue is a preview to the next comics coming from Shaky. It's called The Beef and I can't wait.

For more awesome information and art from Shaky Kane please visit http://www.shakykane.com/
Posted by The Frog Queen at 6:46 AM