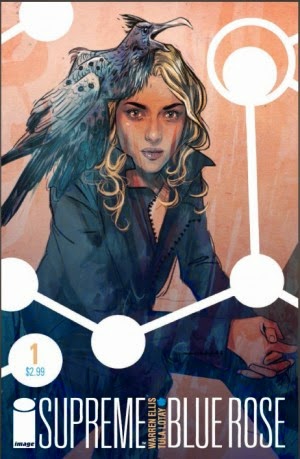 I've been anticipating the release of this book. I got a sneak peak from Image a little while back. I saw the beautiful cover and the illustrations of the first four pages. Beautiful. Tula Lotay who's previously worked on The Witching Hour and Elephantman brings the elegance to this story with her ethereal pen.

Let me just impress the truth upon you that I would never have picked this is up if it hadn't been for Lotay's amazing contribution. Firstly, I'm not a fan of Warren Ellis. I'm not a fan of his "press" personality and I'm not a fan of his writing. Sure he's had his hay day but I take issue with anyone who self-proclaims to be one of the best comic book writers of all time. He certainly doesn't pop up in my mind when I think of great writers. Sadly, whatever talent he did have to captivate an audience, seems to be slipping away. The first issue of Supreme Blue Rose lacks substance. Ellis appears to be trying so hard to keep what he wants to write about a secret, even he doesn't know where this story is going. Nor can he convey it respectfully. Ellis also told CBR and a number of other comic book review sites that he intended to create "A new floor on top of Alan Moore and Rob Liefeld's house," he goes on to say “And, since I had some time on my hands that year, I emailed Image, and we got my friend Tula Lotay involved—and her work will be a revelation to people."

Not I'm not shocked he wasn't up to anything but I do find it shocking that as usual, he think he can hold a candle to some one like Alan Moore. Thank god Lotay was involved so that this comic wasn't a complete waste of time.

So this is a reboot title. Supreme originally ran on Image in the 90's by Moore and Leifeld, among other artists. It looked like shit but had some following.  I thought I'd share some annonymous comments with you that I found over the interwebs at various locations. I don't normally do this but for Ellis, I'll make an exception. First up is a comment from the Front Towards Gamers site:


"Supreme Blue Rose #1 is bloated & boring with terrible artwork, does anyone actually care?"
Obviously I don't agree with the comment about the artwork but it's a pretty big departure from Leifeld (who I dislike and make the brunt of my jokes on perspective). However if you were a big fan of the original Supreme Blue Rose, this would confuse the fuck out of you. Major Spoilers negative comments were:


"There is a lot of dense storytelling and plot points that are not explained, which may turns readers off along the way."

"Even with all the praise I could give Ellis’ writing in the book, it wouldn’t be as memorable without the amazing talent of Tula Lotay."

With the exception of praising Ellis, cause that's kind of impossible here, I mostly agree with that last opinion. God I'm bored just talking about this book. I would really like to see Tula team up with someone like Brian K. Vaughan or someone who is actually an amazing writer like Gaiman. Hell, I'd like to see what comes out of her own head in terms of writing. It seems unfair that she gets stuck with Ellis, who she clearly outshines.