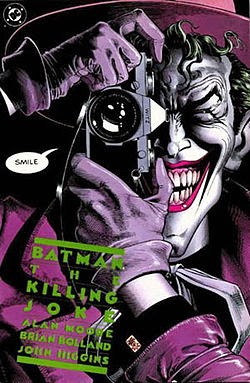 I have been on a Batman kick as of late. I decided to read and re-read the most famous Batman books of all time. I say re-read because obviously, some of them I have read. This is one of those books I read a long time ago but I wanted to visit it again and well... buy the hardcover edition for my graphic novel collection....

The edition I purchased (published in 2008) had a lovely closing letter from artist Brian Bolland speaking about the books ambiguous ending. It's quite cleverly written and I think you may enjoy reading it yourself so I won't spoil it for you. Suffice it to say that he does not comment on the end of the story at all. You see, the ending leaves a silhouette of Batman and the Joker laughing maniacally in the darkness as headlights blare in the distance behind them with the sounds of sirens. What people have surmised and rumored about since publication, is that Batman is actually killing the Joker at that moment. The more obvious choice and what would keep Batman editors happier, is that Batman is merely sharing a laughing fit with his arch nemesis.

There are more firsts in this book than what may or may not be intended in the ending. Another first for the Batman series is an actual Joker origins story, which for me is kind of annoying. I'd rather do without an origins story especially since Moore writes the Joker as a fairly normal guy turned criminal due to extenuating circumstances and personal failure. We've never seen that before, but do keep in mind that this was originally written in 1988. I do enjoy that Moore makes it apparent that the Joker is not originally a very stable man. He leaves gainful employment as a lab tech to peruse a career as a comedian while his wife is pregnant. Moore also shows that this pre-Joker is very short tempered and shows symptoms of classic abuse when he interacts with his wife. This Joker back story has remained alive and kicking to be referenced several times in the years after within the DC universe. 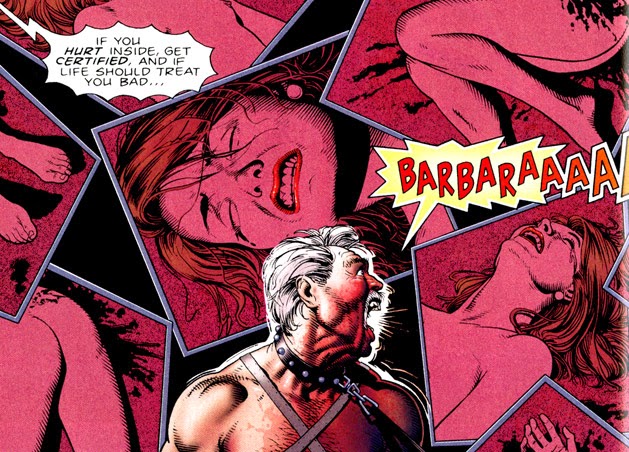 The 80's was a time when comics became more adult. It was certainly the time that Batman went more adult, for example Frank Miller's Batman books. However The Killing Joke stands out as particularly adult due to the horrific crimes perpetrated by the Joker. Commissioner Gordan's daughter is shot, paralyzed and humiliated. The Joker, after shooting her, strips her down and takes pictures (might have done more, Moore doesn't say) and then tortures a beaten, naked Gordan with the photos of his dying, naked daughter. That's pretty heavy. I don't think you get any more adult than that. I dunno if any villain had ever done something that twisted in a comic until that point. I'll ransack my brain about it but I'm having trouble trying to think of an instance.

Now the real important part of this book which sets it all up is the very beginning. Batman goes to visit the Joker in Arkham Asylum to basically plead with him to change his ways. Batman doesn't want the Joker's death on his hands. This really sets up the ending and lets you read into it even more-so. It would make complete sense that Batman in fact kills the Joker at the end of the book. I know I spoil everything. Am I wrong to assume that you have already read the book???!! If you haven't you MUST.  It truly is one of the best Batman stories ever written despite my own personal grudge against the Joker origin story, which in the grand scheme of things, matters not to Allan Moore. Plenty of people have praised the origins story and plenty of people have craved it. So readers, I leave you with the closing scene of the book. The one that has thrilled, pissed off and caused many an argument in the comic book world: the Joker's death?! 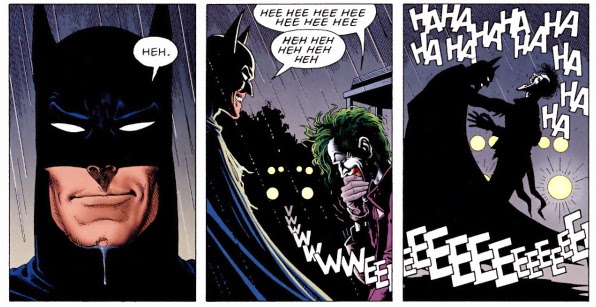