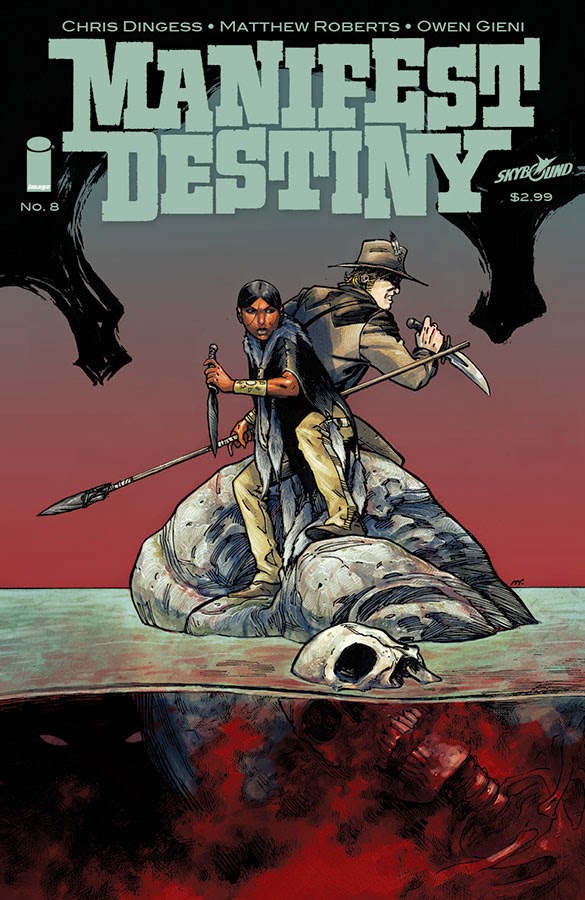 Remember those settlers from the village over-run by man-eating flora? Remember how some women survived? Well one of them turned rapist. Or rather, I should say, attempted rapist. I'm glad he didn't get away with it is all I'll say. I'm glad that so far, Manifest Destiny creators have allowed the women of the story to be strong, important characters. In fact the more I read this story, the more I realize that the only characters who are just and intelligent are the women folk. The men folk are generally stubborn and arrogant which apparently gets them into a lot of bad situations. Let's consider the times though.

Manifest Destiny has been an exciting, fast paced adventure in danger land. Seriously, it's like they're in fucking Australia because like Australia, everything in the Manifest Destiny world can kill you. At least they were somewhat able to deal with the giant frogs from issue 7. You know, sorta. I guess it's good that there are no children in this story since they'd pretty much be dead or turning into that homicidal kid from The Walking Dead. hmmm actually, I kinda wan to see some creepy kids in this story. Can we make that happen?
Posted by The Frog Queen at 5:42 AM