Ode to Kirihito by Osamu Tezuka 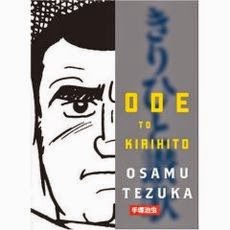 I haven't read everything by Tezuka, but I intend to. It took me about a year to find volume 1 and 2 of this story. In the end I found it at the Silver Snail in Toronto. I had tried multiple times to order it online, only to have my money refunded each time and told that there was a mistake and the books are not available for order. Out of all of Tezuka's work, I felt like this was somehow written especially for me. I think I was pretty bang on.

The story begins with a few doctors researching a cure for a mysterious disease known as monmow. This crippling affliction begins with severe headaches, then fever, while slowly transforming the victims body into that which resembles a dog or badger. It is important to remember that this story was first serialized in 1970 and therefore the story takes place in the era it is written. This story is so moving as it deals with the discrimination both real between races on our planet to this day, and discrimination which happens to those who suffer illness. It compounds all this with the obvious about loving a person for who they are and not what they happen to look like.

The story follows Dr. Kirihito who contracts the disease in his attempt to find a cure and the medical professionals who sabotage his career and his life. The story is very critical of Japan's medical facilities at the time, depicting corruption among professional peers in the medical community. In addition, he exposes altered and unsubstantiated claims regarding the nature of the monmow disease which although fictitious, is an obvious metaphor for other illness. Tezuka tells us how one man twists the fact to further his own career while endangering the lives of many.

Although this criticism exists between the lines, many of the characters are simply human and not completely good or evil. It causes many issues for the reader. For instance, regarding the scene where one of the doctors rapes Kirihito's fiance. It was common in Japan (and many other places around the world) that women who suffered rape attempt to keep it a secret for fear of accusation. Women were often faulted (like still today) for the actions of their aggressors. Not to mention women are viewed as a desecrated tomb after a rape. How horrific is that? However, Tezuka goes on to paint the doctor who had committed the heinous crime in a more positive light. He is depicted as remorseful and attempts to rectify his actions to the woman. This part sort of turns my stomach and makes me feel uneasy until later assaults another women, this time a patient of his. This just made me sick yet at the same time it accurately depicts the cycle of violence and abuse so I have to admire Tezuka's work. His ability to evoke such a strong reaction makes him a truly amazing writer.

It should be noted that Ode to Kirihito was written before Tezuka's famous medical series Black Jack. It differs greatly in that it is one intact story while Black Jack is a traditional serial with a "medical emergency of the week" structure. I could write an essay about this one but I'll stop here. Just go read the damn book.
Posted by The Frog Queen at 4:19 AM