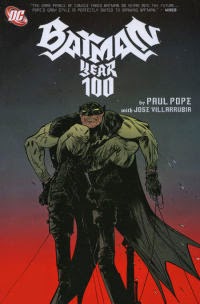 I hadn't actually read this book before. Only noticed it. I like Batman, don't get me wrong but as of late I have a difficult time letting myself pick up super hero type books. Somehow it's much easier when the artist is Paul Pope. I can trust him. I know it's not going to be drudgery to read. I'm really happy I decided to take a little leap and read some old Batman. It's actually made me wanna look into some older Batman.

Year 100 takes place in Gotham in 2039. The Batman is considered no more yet reports are whispered through Gotham and this time they are confirmed. Chief of the Gotham Police is pulled into a deadly conspiracy run by the feds and Batman learns about a virus known as the flesheater. The feds are baffled as to who this Batman really is and how he's been able to conduct a century of tyranny over Gotham's criminal initiatives. They assume there must be an inherited role. The Batman couldn't possibly be the same one man for the last 100 years. Or could he?

At the end of the book is a little Pope bonus issue from Batman Chronicles. The story takes place in 1939, the year of Batman's original debut. Of course, Gotham doesn't appear to exist and all this story takes place in Berlin. See image below which is distinctly Pope however was colored using a basic pallet of rudimentary colors, as if it had been printed in the 40s. This trade is definitely worth picking up. There are also some really nice portraits at the end.