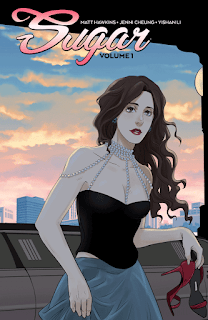 Posted by The Frog Queen at 6:38 AM No comments: 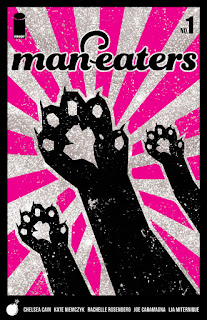 I thought it was about time I started writing review articles again and why not start with something deviously named MAN EATERS. This is a new on-going series from New York Times bestselling thriller writer Chelsea Cain. This creator owned series is published by Image Comics and complete with expert interior illustration by artist Kate Niemczyk who has worked for everyone from Marvel to Dark Horse and yes even the game giant Blizzard. All the gutsy and glitsy cover art is by Lia Miternique who is a bit of newcomer to comics but not to design.

So I bet you're wondering what a book about man eaters could be about. Well it's not about cannibals...exactly. Essentially in this story, the world is rocked by a new plague. In fact a mutation in Toxoplasmosis. Toxoplasmosis is something cat owners these days don't really concern themselves with. It is a disease caused by the parasite Toxoplasma gondii, which can be found in garden soil and raw meat. Cats can get toxoplasma infection by killing and eating infected prey. The disease can also be passed on from cats to humans. However in MAN EATERS the mutation causes menstruating women to turn into ferocious, killer wildcats. It has caused more than a few deaths. So many in fact that the government had to create a new task force to deal with the devastation.

So what do I think about this debut killer issue? I think the idea is pretty fun and although it did remind me a bit of Cat People with Malcolm McDowell at first, it's a pretty far cry from the 80's thriller. It also doesn't seem to take itself too seriously which is a major pitfall of most thriller and horror stories lately. Without spoiling much of the story I have to ask however, why tampons?  Allow me to just go on a bloody tangent here. I totally get that tampons are a big symbol in this book because we're dealing with menstruating women who turn into human eating cats but WHY tampons? Is it because it's penetrative? Is it because pads and diva cups will confuse male readers? That seems a bit unlikely.

So why tampons? I hate tampons. I could never get them to work, leaking little turds that were uncomfortable and prone to infecting a gal. Not to mention that the whole history of the tampon is still accredited to a man. The whole idea of plugging up your vagina was not invented by the guy who first patented the tampon. (Dr. Earle Haas Women have been sticking things up there to soak up blood since ancient Egypt but still a man gets credit for inventing the tampon... the world is really confusing.) Regardless I am left assuming that penetration is the point here not to mention the control a tampon (is suppose to lend). The whole story is pretty much society trying to control the sexual maturity of women... you know, exactly like society in real life. I'm not being sarcastic. That's how I actually look at the world and what I believe to be true. I think a lot of us see that as truth. Okay let's move away from tampons and deeply depressing reality faced by women during puberty.

As for interior art, I think you're going to be pretty at home with this book if you're a Marvel comics fan. Niemczyk & Cain were responsible for the very celebrated and also very much attacked MOCKINGBIRD: My Feminist Agenda. Here like the artwork in Mockingbird, we have panels that are straight forward in their intention. It's easy to grasp what's happening in every panel, emotions are precise and clear. You don't have to guess who characters are half the time because they are easily distinguished from each other. Of course if you've read many of my reviews or watched my videos you know that one of my major pet peeves in the comic world is a book with a bunch of characters who all look the same.

MAN EATERS #1 is available in stores September 26th and I completely recommend you putting it on your pull list because it's quite a bit of fun.