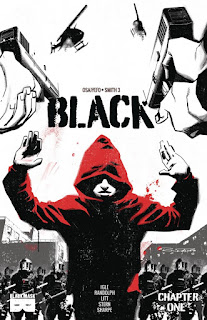 Posted by The Frog Queen at 6:24 AM No comments:

Before reading my review of issue #2, you may wish to watch my thoughts and coverage of issue one and don't forget to subscribe to my YouTube channel!

Issue #2 of The Skeptics is currently available from Black Mask Studios as of November 30th. I hadn't previously spoiled the ending of this issue one but for the sake of a thorough review I'm going to spoil it now. At the end of issue #1, our two young grifters found more than they thought they would within the government facility. They found genetic experiments in the form of humans with telepathic abilities, these are supposed to be the soviet super weapons. At least that's what I gathered from the brief moment our two protagonists. With the beginning of issue #2, the grifters are apprehended by the authorities. They have no intention of giving themselves up for phonies however and they insist they are now telepathic. They further play up the charade by insisting that they can read the minds of everyone around them. This is all for the sake of finding a specific file all about the soviets super weapon, the twins.

Unfortunately, our protagonists are shoved up on stage with the president AND the soviet twins who quickly announce LIVE that the two american teenagers have no psychic abilities. The issue leaves off with a chaotic montage illustrating the fear and panic our charlatans must face in the coming issue.

There are a couple really interesting panels in this issue that I want to point out but most pointedly, I have to say I loved this panel:

Devaki's use of foreground in this particular panel really drew my eyes in on this page. It ended up being my favorite page and it was the first one in the issue. She does this a few more times throughout the issue and I really like this cropping effect as often times artists attempt to show us too much and panels can end up feeling rather cold. Perhaps that's a completely personal opinion that only I share LOL.

Although this issue isn't terribly long, is does take you right up to the point where the plot thickens. How are our little teenage grifters going to get out of this one? What are the consequences for deceiving the president and attempting to fool the american public & free press? I suspect they'll be thrown straight into prison unless they can turn the situation around and somehow infer that the soviets are the ones who aren't psychic which really, isn't that what the american government wants?

Posted by The Frog Queen at 5:35 AM No comments: