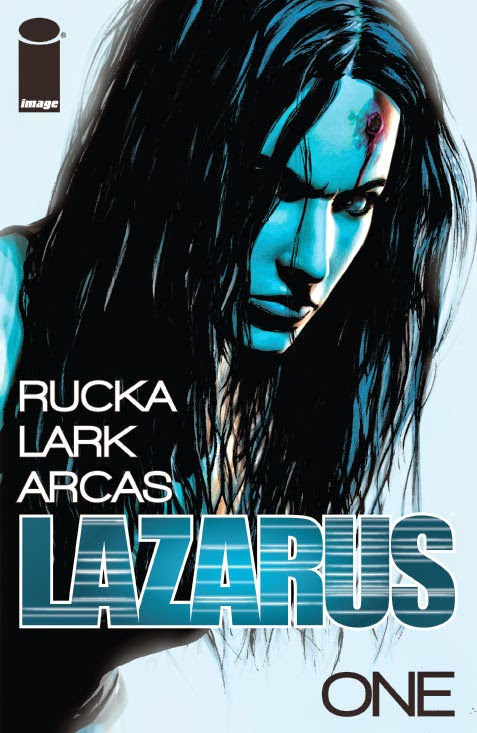 I kind of ignored this book. Why you may ask? The artwork didn't leap out at me. It's not my style unfortunately. However I picked this up at the recommendation of my friend Gavin from Monster Comics and he was right. Great story. I mean, killer story. As in now I have to go buy the other trades. August 6th marks the release of Volume 10. The story still continues. Let's see, can I read the other 8 volumes before the release? Challenge Accepted!

So moving on, below is a page from issue 1 of Lazarus. You can immediately see why/how it is not something I would start gushing over. It's not bad artwork. I get that. It's just not the type of thing that gets me going. Hey, it's not fucking Buffy and I'm happy about that. It's also not Liefeld, so I'm happy about that too. It doesn't turn me crank but it doesn't turn me off. The characters lack facial expressions to properly pull at my emotions. They feel flat and sometimes a little rigid. It feels mediocre and so does the coloring. Actually Chris (boyfriend Chris) was peeking over my shoulder to look at it, it should be noted that Chris is a graphic artist who does not read comics. He noted that the coloring was an issue. I think the word he use was "boring". Anyway... let's not be insulting. 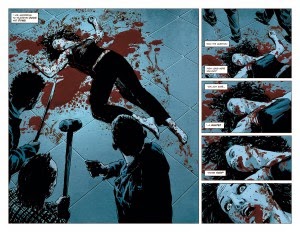 The story is great. I don't generally take up with the dystopian Earth crap anymore. I got tired of it and decided I like space a lot more than stupid "post-apocalyptic-we-rebuilt-civilization-and-it's-uncivilized" Earth. This one is pretty interesting and I think that is simply because of the characters. I really like the main character Forever. She's on the cover and she is known as a Lazarus. From what I gather so far, she is a genetically engineered human, built to protect a family who owns a LOT of shit.The Lazarus also appears to have a lot of cyborg-like qualities. They talk about implants and things. I am afraid I can't go into detail on those. I have only read the first volume.

In this world, certain families own everything. They're like corporations really. Everybody else is classified as either surfs or wastes. Forever is a complex character and not exactly what you think an immortal killing machine would be. Honestly I doubt she's immortal but she does possess the ability to put herself back together again. However, she's sympathetic to people even the ones she must dispose of at the wishes of her "family". It's mentioned how her reaction to killing is perhaps abnormal because she does feel remorse where is appears much of the people in this world no longer possess that quality. I assume it's her ability to feel physical pain when she's killed, that actually increases her sympathy for others.

Lazarus came out in 2013 and is just a small part of Greg Rucka's extensive career which has found him nominated for countless Eisner Awards with many wins. Even if the artwork isn't your thing, check out Lazarus. You won't be disappointed.