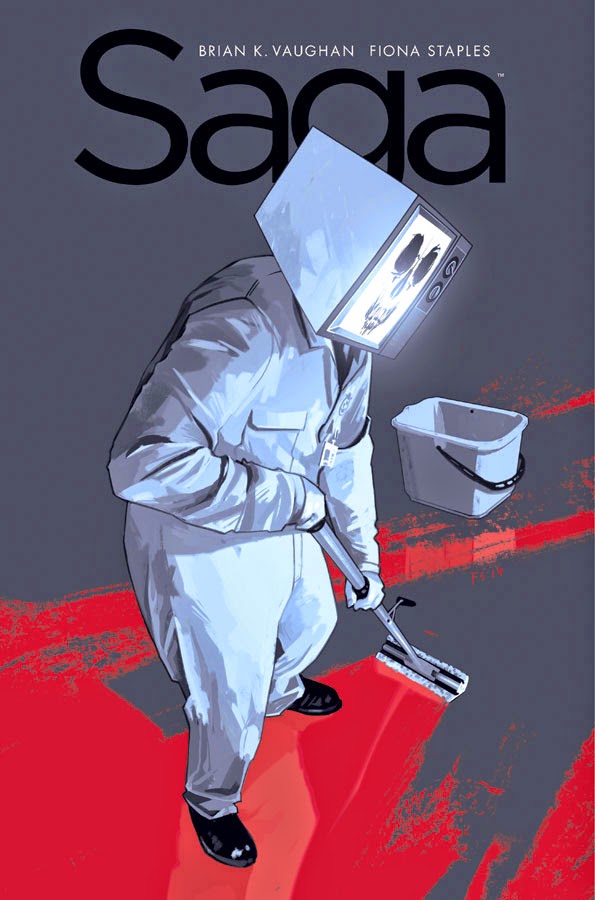 Every time I get my hands on the latest issue of Saga, I feel like it's been a year since I had my hands on the last one! Always takes me a few minutes to jog my memory on the previous events. Usually the cover lends itself to that task. Do you remember what happened in issue 20? It was an awfully large development! Robot Prince IV's lovely wife was murdered and his new baby boy stolen! However Prince IV doesn't even know it happened, let alone his new baby boy has been born because he's held as a hostage on Sextillion. Well, he doesn't realize he's being held hostage. I guess there is a slight difference there.

Meanwhile in wedded bliss last, Alana is succumbing to the depression of working on the Open Circuit and quickly becoming a drug addict. So far Marko seems to be doing a fairly good job of keeping purple batgirl at bay. She's come on a lot more strong and made her feelings known but Marko has played ignorant of her obvious motives. I wonder when Alana will find out.

What kind of developments do you want to see? We already know from that Marko and Alana are doomed to break up. I think however, that they will get back together. That's kind of Vaughan's style is it now? It's like misdirection... I keep feeling like batgirl is actually some inter galactic spy who is suppose to quietly bring Alana and Marko in. Especially since she asked to meet Alana. Theories?
Posted by The Frog Queen at 4:56 AM