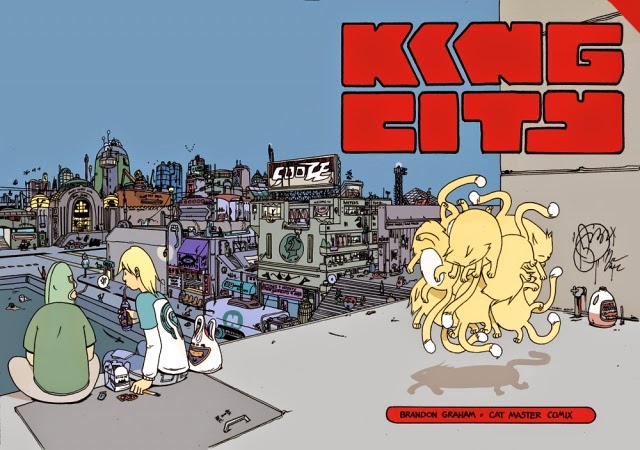 Yippiee! I've been lucky to talk to so many of my favorite artists and writers lately! It's truly an honor. This time I got to ask Brandon Graham a few fun questions about his career. Brandon Graham is one of my favorite artists. I got into heavily ever since being introduced to his work by a friend. Check out what he has to say about his work and of course, check out Brandon's work!!

TFQ: I'm a huge fan of Prophet, King City, and Multiple Warheads. How do you feel about writing for Prophet on a full-time basis oppose to writing and illustrating the story completely on your own?

Brandon: Thanks a lot.

It's a different animal working collaboratively.  I write different kinds of stories when it's for other people. Sometimes it feels more like editing than writing--I often do the scrips for other artists with rough thumbnails of the pages--and even then, how the story reads is mostly in their hands and in the hands of the colorist. That's fun though. I like having an idea of how a scene will go and then getting back something that makes me think about it in a new way--and hopefully be able to compliment it with the text I add.

I can't overstate how happy I am to have been able to work with the amazingly talented people that I've got on Prophet.

On Prophet there's things to consider outside of myself--first that I'm messing with Liefeld's universe and then that I want the stuff to be worth the time of Simon, Giannis,  Farel and the rest of the guys I work with--and then even the lettering being done by Ed is another step. Another thing that changes how it reads.-- When I work alone, it's all just me fucking around lettering it right on the art and then coloring it all myself-- There's also something to be said for how many hours I can think about a page when I'm the one drawing it.


TFQ: What if any, kind of hurdles did you have to overcome during your career? What are the biggest challenges you face?

Brandon: I guess the main thing early on was finding publishers to back me. I think things are somewhat different now with the internet and all-- but back then for me it was 50 copies at kinko's or a publisher.

I'd always felt like the publishing scene was too much of a two party system with Batman-whatever on one side and Fantagraphics indie on the other-- and as much as I enjoy that stuff, neither of those were really the comics that I was about. Even that is different now. so good. Onward and upward.

I think the main challenges now for me are all in the work, where they should be. I'm also very interested in comics as a scene and helping to make things more like I would like them. I want more ins for all kinds of creators and more challenges in the work-- The work that kills me in comics is still often outside comic shelves-- like Deforge or Emily Carroll or EK Weaver. It's important to me to try and do work on the same level as those guys.

I feel like comics is in a great spot as far as what the readers are looking for now. (especially at Image, where I'm at) The readers seem up for whatever we've got-- and enough of them want to be challenged. Like "what else can you give us--where else have you got to go?" We are in exciting times.

TFQ: Your work has such unique coloring. There is a lot of use of pastels giving everything a very playful feel when the subject matter is intended for adults. For instance, Multiple Warheads. How do you chose your pallet?

Brandon: I feel like there's something about the juxtaposition of more cartoony images or colors with more adult subject matter that I think works well.
My pal Tom Herpich's work is a great example of that.

I feel like my taste in colors is set 20 years back. Whenever I look at older Moebius or Bode work-- it's like "ohh that's where I got that!" I mean, hopefully what I do is my own thing but I'm often thinking of the work that excited me.

I like the colors not to over power the lines.  So I think that's what makes me aim to keep it all light and flat. Recently the colors of my significant other Marian, have been influencing me a lot. I used to feel like I was always running out of colors but the way she works is so much more about the tones of things-- so a color page can be mostly all greys or browns but different shades of the same color. Thinking that way has made coloring much more fun for me.

Also, the artists Little Thunder's work is big deal to me as far as color. The way she uses white is amazing.

TFQ: If you could work with anyone, which artists or writer do you most want to work with?

Brandon: It was a really big deal for me to be able to work with Adam Warren recently. I'd grown up on his comics and was already a huge fan of Empowered. Unfortunately, the issue we did printed a lot darker that I would've liked. I think how in comics the final thing is often a little out of your hands.

I'd like to work off of something Marian wrote someday and there`s always artists like Patrick McEown or Rebecca Sugar. Finding someway to collaborate with them would be fun.

I'm pretty excited about some of the new dudes I'm working with on Prophet: Ron Ackins, Grim Wilkins, and this time with Matt Sheean and Malachi Ward on colors.

But yeah, I see myself mostly slowing down working with other people in the future. I love doing it but writing and drawing my own stuff has always been the most fun for me. 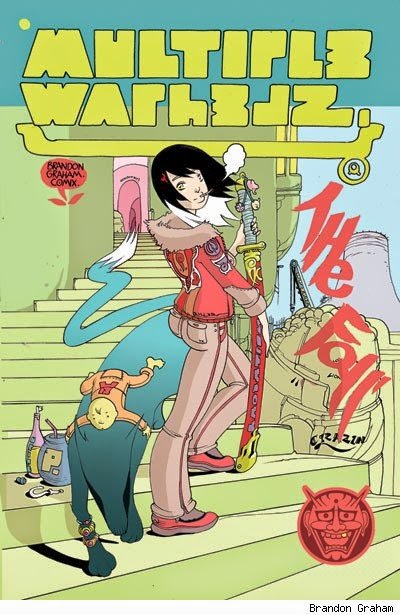 TFQ: Can you tell me what kinda of upcoming projects you have? Do you have any plans to release another series illustrated and written by yourself?

Brandon: 8house, is the next thing to come out. It`s a series of comics all set in the same universe. I`m working with Marian and Xurxo Penalta on those and then Emma Rios and Hwei Lim and Fil Barlow are all doing other books in the same line.

Then some other things that haven't been announced yet and yeah, I`ve been working on more Warheads recently.


I`m really looking forward to doing some self contained stories in the near future too. I`ve been looking at a lot of Moebius comics from the 80`s and 70`s and what hits me the hardest are his short comics. I like seeing those slivers of worlds.