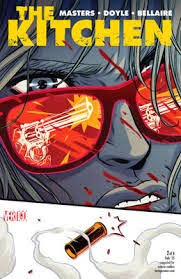 I guess it's my week for Vertigo items, along with Sandman Overture this week we got the second issue of The Kitchen. Let's get right into it shall we? I loved the shit out of the first issue. I raved about it actually. Told a lot of friends that they were mental to not pick up a copy. The second issue is just as good. I love these women!

There's something about women not taking shit that makes me feel better about myself. Too often people are quick to judge the opinionated, passionate female who can stand up against ridicule and misogynistic scrutiny. They call her a bitch. I get called a bitch. Happened yesterday, it happens a lot actually. Generally just online and no one comes to my defense when it happens. It's easily assumed that they are too fearful of receiving the abuse as well, like two of the ladies in the first issue. It's not often people stand up for a lady who's not scared to defend herself. Where I defend myself with words, the ladies of The Kitchen defend themselves with weapons and sometimes random objects laying around. Like ashtrays...

This book may end up being labeled as a pro-feminist book but does having strong, realistic female characters in a story really make it feminist writing? It's strange to me how one book can be labeled feminist while another is not. A book that is written by a woman and containing female characters doesn't automatically qualify as feminist literature. A lot of critics have made this mistake and in their haste to declare something "girl power of the year" they have neglected to notice that the story is completely devoid of feminist issues. (Ollie Masters, author of The Kitchen is a man but I'm referring to some recent activity about some other series this month) We shouldn't have to label books that contain positive female roles feminist simply because we don't see enough of them. That's almost offensive. When will it be the norm to have real female characters? Ones that don't serve merely as plot devices and things for the male characters to have sex with?

Due to the fact that this story takes place in a time when women were only just finding their place in the workforce and the world, this story is much more fitting of the title "feminist" literature than a lot of things receiving the title lately. That's not to say that some books receiving the title are not pro-woman but that they are mislabeled as feminist because they center around female characters. They contain no real content that addresses feminist ideology. It's a great time in comics. More and more women are creators! This is amazing! To be sure, they've been there all along, it's just that most people haven't acknowledged them until recently. Yet critics should realize that their work isn't automatically feminist in nature. So stop calling everything feminist when you clearly have no idea what a feminist even is! (still talking to the critics/journalists/bloggers) And if you were confused about what a feminist looks and sounds like, it looks and sounds like me. I'm a feminist.