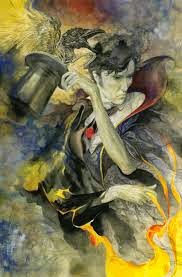 This issue is suppose to see Morpheus facing his greatest foe! There's not real battle as you would image. There aren't swords or lasers, although disintegration people sort of happen.. It's a heated debate of the wits. Defending ones existences by debating the very thing; existence. It doesn't end well for the dream lord's travelling partner, the little girl Hope.  She gets wiped and deleted. This creature isn't simply hell bent on destroying Morpheus and his companions, he wants to wipe the universe. This is the first story ever where the identity of Morpheus' Father (and the father of the Endless) is revealed.

Sandman Overture is intended to be a 6 part mini series. It was also intended to be released bi-monthly but ended up being released on the schedule of  "whenever we got it ready people".

Of course you probably know that it's on Vertigo (DC) as the title has been since it's creation. I'm shocked at just how few reviews I have found for this book actually. Entertainment Weekly tends to pick up the larger things in comics like anything Gaiman or Millar touches. Even EW didn't bother with it until the day before release. They got an interview with both Gaiman and Williams III (and added some typos, I know I'm a picky lady). There Gaiman admits that he's known who the father of the Endless was for 20 odd years. Which I imagine if he's anything like I am, is meticulous when creating stories even if all the characters are not included in the first go.

It's really very difficult for me to appreciate Morpheus drawn by anyone other than Sam Kieth. I'm a die hard that way. However Williams III's depiction is much more gaunt and true to that Morpheus character than the many more pop-culture-goth-inspired incarnations of the mid 90's. There's also the fact that Williams III's work is beautiful. Drop dead gorgeous. If the Sandman Overture was a person it'd be the guy or girl in high school that everyone wanted to take to the prom- exceptionally beautiful.

I'll leave you with Gainman's comment to EW which is in reference to the artwork for the final issue of Overture:

"In the script I talked to him a lot about Escher and Steranko, about pop art, about ways of treating the comic as a physical object and about making something more beautiful than anything we had done before.

And then he took all that and went off and did something completely new, completely original, and utterly striking." -Neil Gaiman

That last bit is going to keep me guessing. Can't wait.
Posted by The Frog Queen at 4:40 AM