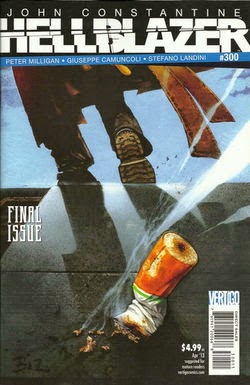 I dunno if you know this but there are plenty of books that I read, which I do not end up immediately writing about. I have a large stack of books which are older that I missed during release while some are actually re-reads. I decided last month that I would re-read all of Hellblazer...from the beginning. That's a lot of Hellblazer. Vertigo has been re-releasing all of the books but this time with as numbered volumes. Something which did not exist previously. I have some of the original TP's but missed a few here and there. I also have more issues than I can count including the complete Peter Milligan run. Anyway, 2015 sounded like a great year filling in the holes in my Hellblazer collection.

Holes you say? Well it's going to be difficult. There are specific issues/specials and otherwise that never made it into collected editions. When you make it up to Volume 11, you start to see some publication holes. The first hole is 10 issues deep starting with issue 118 to 128. That brings us up to August 1998. What do you miss down this hole? Well a birth, a pub crawl, a trip to America, a familiar face back from the dead, The First's question, a succubus and a whole lot of Constantine family drama involving Hell. It's actually a lot to miss considering it's almost an entire year of Hellblazer. While some of these issues do not fall under a named story arc, the last fall under Paul Jenkins "How to Play With Fire".

With Vertigo's steady release of additional Hellblazer volumes, I hope to see the holes close up. Andy Diggle and Peter Milligan's runs look fairly intact in trade history. There are bits and pieces scattered around from other Hellblazer contributors including one I don't have have from Paul Jenkins and Paul Pope's "Tell Me" story. That one is of particular interest to me and I doubt I'm likely to find it in my little city on the water.

I was pretty upset at Vertigo's decision to axe Hellblazer and pull Constantine into the tripe known as the New 52. He belonged with Vertigo and he belonged walking through other series like Sandman, Swamp Thing and the like. He has no business in that universe in my opinion. My contempt for Ray Fawkes grew with every issue and then Future's End happened...I realized it was all over. I figured it was best to remember my dead John Constantine in his best days with Milligan, Ennis, Carey and Morrison. The Constantine arc in the New 52 universe is just a figment of someone's lack luster imagination.
Posted by The Frog Queen at 4:25 AM