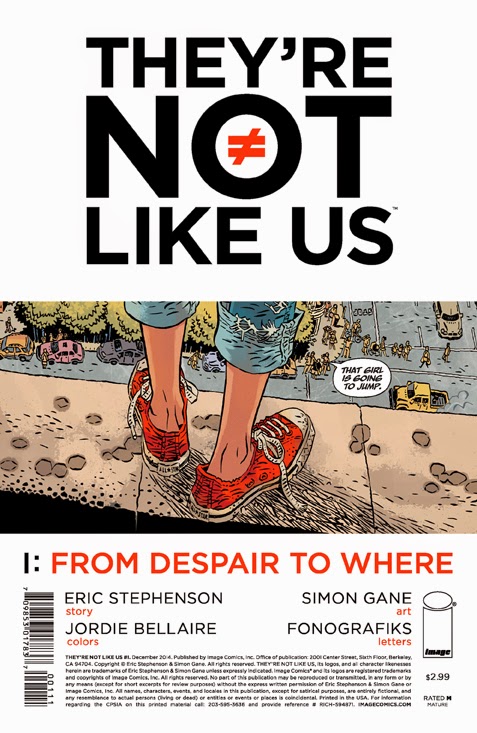 The holidays are making me slack with my writing but that's not my fault. As most people, I'm busy with friends and family. Finding a quiet moment to type out a review hasn't been easy. I got a few minutes so let me just bang this out.

I was really excited for this release. They're Not Like Us being a new collaboration between Simon Gane and Eric Stephenson. Gane being once called the king of "punk" comics aesthetic. Stephenson was nominated for an Eisner Award for writing Nowhere Men. They two have begun an on-going series with Image and it's beautiful. Although I have the distinct feeling that this story runs along the lines of "Xaviers School for Gifted Children", and so far doesn't appear to be completely unique. I could probably even read something Ellis wrote is it was illustrated by Gane.

The story starts right at the first depiction and speech bubble on the cover "That girl is going to jump". Well, she wants to jump but that's not exactly what happens. She wakes up in a hospital being torn busted out by a stranger who takes her to... well a special club for people with special abilities. They don't reveal much but show off a nice record collection.

So far, I can't say much for the story but I love the artwork. It's so very hip and indie. It's exactly what you'd expect. The colors done by Jordie Bellaire really makes the ink pop. There's a vintage feel hiding in those rusty colors. Even the blue feels rusty. The book certainly stands out against a lot of what's hot in comics right now. Lined up to bright pinks and purples of many indie comics and then the dramatically colored action comics of Marvel and DC. Although I'm not blown away by the story, I'm certainly in tune with this artwork. I'm excited to see more.
Posted by The Frog Queen at 8:03 AM