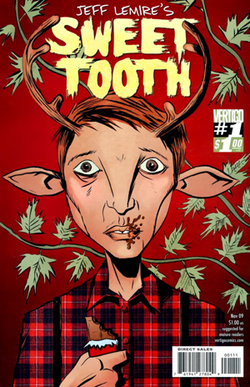 Got my Library card activated, watch out! Ever see a girl get really reclusive and stay in her room reading comics and ignoring everybody?? Well your about to...it's not pretty.

So I read the first issue of Sweet Tooth at Steve Reno's off of Spring Garden Rd and had to go back for the next two volumes which the Library had. I'll have to order the rest. They were checked out.

So what I read on Wikipedia about the comic doesn't really describe it in an accurate way. At least it's bland enough to be a summary on wikipedia but here's my summary:

On post apocalyptic Earth, most of humanity is dying of a plague while new born babies are being born as hybrid human-animals; all kinds of different species of animals and no, from what I can tell, women have not been participating in bestiality. It's some sort of survival of the human race, cell mutation. We've seen this before.

The story follows a hybrid boy-deer who claims to be 9. He grew up in the woods with his father and the bible (notice how I didn't capitalize bible?) He was told to never leave the woods because hunters would get him. His dead father was right. There are hunters looking for hybrids to sell for their own survival in this desperate part of the world. Gus, affectionately known as "Sweet Tooth" by the first dude that comes along to sell him, (Jeppard) begins his adventure through the lie that he is going to go to a safe place for hybrids. Jeppard sells him off to a group of "scientists" and that's how the first volume ends.

Now, how do I feel about the book thus far? I actually really liked it. Enough to return it right away and grab the next two volumes available. I had seen the singles kicking around the comic book stores for the past couple years but neglected them. I always liked the cover art but passed over it for other things... being cheap and all. I really do like the artwork. Its gaunt, ugly characters accurately reflects what post apocalyptic Earth should look like. I get that desperate feeling that minimalism always makes me feel. (I should read less minimalistic comics... on second thought no. I am a minimalistic artist and I love art that is of the same vein.)

The story itself was enough to keep me going back and probably just because I wanted to see awful experiments happen to Gus, cause I'm sadistic? Or something?? The script left me wanting more, but the characters seem mostly ignorant and yokel-like so I guess that fits. I'm going to read the next two volumes. I have to. I'll let you know if I actually want to read more when I'm done.