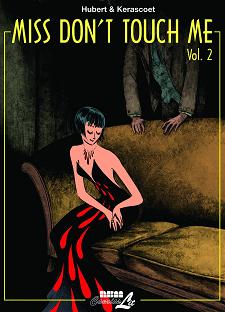 Well, we already know how much I love the French art in the first Volume. This one is done by the exact same team. So lets skip right to the story-

In Volume 2, Blanche is still living in the Pompadour Brothel as the main attraction, a virgin dominatrix. However, she immediately tries to get out of the lifestyle only to receive a large bill from the Brothel of over priced soap and utilities that's she's used since her stay. At any rate, it's all too much for her to ever be able leave. Hope seeps in as she has a new customer with a big pocket book that courts her and asks for her hand in marriage. At the Brothel, Blanche isn't getting along with any of her co-workers and ends up drugged and framed by some of the less moral girls she works with. To add to it, her alcoholic mother drops in and starts a mooching process while bringing her new man Hank along for the ride. It's around this time, her beloved Antoinne goes missing. Blanche attempts to recover him dressing in mens garb she attempts to break him free of his meddling mothers bonds. I won't spoil the ending as it's particularly awesome.

I really love all the gender bending this book has to offer. From cross dressing to crazy people that think lobotomy can fix homosexuality, there's a lot of things going on  in every direction. I really wish there was a volume 3 but sadly this seems to be where the story ends. Poor Blanche.
Posted by The Frog Queen at 6:15 AM

Email ThisBlogThis!Share to TwitterShare to FacebookShare to Pinterest
Labels: Miss Don't Touch Me