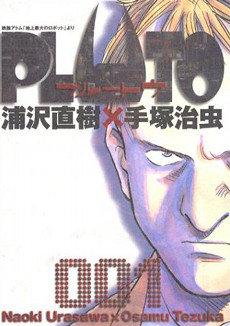 I just started reading Pluto which has been recommended to me by many people, which I sort of wanted to ignore because… murder mysteries bore me. I am not joking…I really don’t like reading murder mysteries for the most part. (That is of course aside from Law & Order but I believe that is mostly due to Kathryn & I's drinking game. Don't worry I'll post the rules... they are extensive however) I had several people assure me that it’s no ordinary murder mystery and actually is a carefully crafted, emotional story. So FINE! I AM READING IT! And………….. I am actually liking it.
“Pluto” is based on a story arc taken from Astro Boy called “The Greatest Robot on Earth”.  The story begins with the un-timely death of a much loved, philanthropic robot. Our main character Gesicht is a newer model robot detective who begins to unravel the mystery of a serial murder case.  I really like Gesicht (His name is German for ‘face’ by the way). The robots in Pluto, like the robots in Astro Boy are more than just emotionless figures. They are complicated with lives and feelings. It’s pretty neat, much like Philip K. Dick’s Androids really, well except they live much longer.
I really loved the story about the blind music composer and his new butler that happens to be an ex-war robot. It was really touching and I felt really sad at the end of that part of the story. I don't want to give much away. I really like how the manga is drawn. I find a wide range of emotions come across in the still actions of the frames, more-so than a lot of manga I have read in the past. It's a little cartoon-ey yet holds some form of sophistication that sneaks up on you. The story quickly becomes very dramatic and I wouldn't have expected it at all by reading some of the reviews online. It really didn't sound like something I would enjoy. I really do like it though and I am going to read the rest of the series. Got it on order at the Library ! I'll let you know.
Posted by The Frog Queen at 1:30 PM