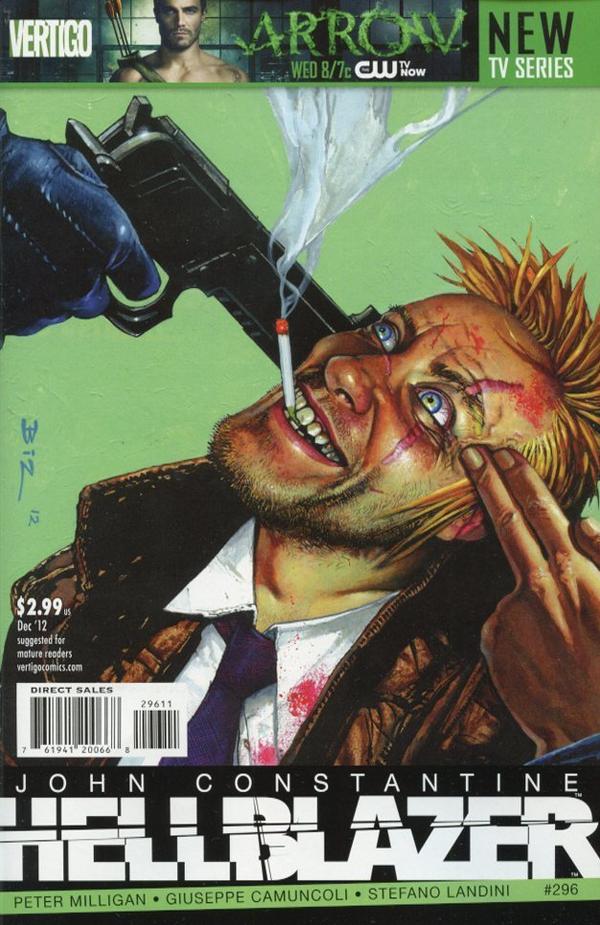 Hellblazer ends on issue 300. This hurts me. He’s being re-launched under the title Constantine, DC tells us. I really like the current run of Hellblazer. I like that he’s old and even more jaded. I like that he’s a mess. I like what Peter Mulligan has done with him. DC wants to take the character back to the age he is in The Dark Avengers. SIGH.Robert Venditti and Renato Guedes are launching the series on what is known currently as the “New 52” DC Universe.

Robert Venditti is known for his work The Surrogrates which apparently turned into a Bruce Willis movie by Disney? I’m attempting to recall this from my memory. Renato Guedes did some work on Superman? That’s all I could find. I don’t read Superman. I dunno if I’ll ever read Superman. I just don’t care.  So yeah, I’m not very happy about all this. I haven’t found anything online as far as an explanation as to why DC is pulling John Constantine from Vertigo. Are they trying to save him from Vertigo’s apparently inevitable demise?
Wikipedia claims that Constantine appears as one of the lead characters in the Justice League Dark and that his history has been “slightly” altered. He apparently meets Zatanna in New York instead of San Francisco and the back story of his trench coat has been changed. Wiki says that they added history of Constantine meeting Nick Necro who was implied to be John’s mentor and original owner of the trench coat. The new series is supposed to follow these changes. News-a-rama quoted Venditti as saying:
"He's going to be the same age that he is in Justice League Dark and the same character that people know and recognize - the drinking and smoking, the con man aspect of him - that's going to be very much part of the series,"
One can only hope. But still, I LIKE OLD CONSTANTINE. Gah.. Anyway, I’m on issue 296 and that means I’ve only got 4 more to read and no more aging, jaded, throw-my-life-away John Constantine. I keep feeling like Piffy (his wife) is going to die, but to be fair, I think she’s going to be killed off every issue and that’s because I like her…which means she’s pretty much slated for death.  Stay tuned for spoilers and my opinion on the ending of one of my favourite comic book series.
Posted by The Frog Queen at 1:26 PM