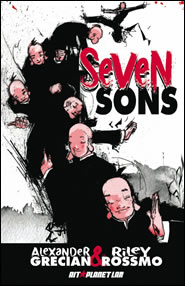 Some of my favourite stories start out in book stores. The story begins with an old man recanting the "true" story of seven identical brothers from China. They escaped the Manchu Dynasty's tyranny and went to America to become gold prospectors.  Of course Xenophobia takes hold when what was meant as a heroic attempt to save a few drowning children, ends in tragedy. The entire story is tragic, or is it?? There's a cute little surprise at the end.

The art is a sort of a sketchy-graffiti, the kind of art that gets me going. Entirely in black and white. Beautiful. This graphic novel was originally released as singles and collected now in one small trade paper. It's not printed on expensive paper (indie comics) and it's not super flashy when you see it on a shelf. The fact that is caught my eye was because the artwork on the cover is hopelessly up my alley. It's a quick read and the artwork is really what counts here. I would post some panels but I couldn't find any online.. not even a wiki site. Big Surprise!
Posted by The Frog Queen at 10:16 AM