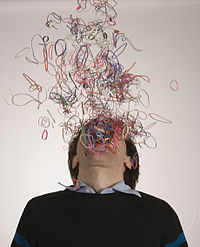 I don’t own a single album by Emperor X. Unfortunately out here in the middle of f’n Nova Scotia, severely independent artists like them are nearly impossible to get your hands on.  This could also be due to the fact that front-man C.R. Matheny likes to hide and sometimes bury physical copies of b-sides around the U.S. posting GPS coordinates for his fan to use to uncover them. Cute idea turned really annoying for fans who just hope that the people who get their hands on the stuff will post it on cyberspace for everyone. Subsequently, the only Emperor X that I get to enjoy is whatever is posted on GrooveShark, which is the album “Western Teleport”, “Tectonic Membrane/Thin Strip on an Edgeless Platform” and some random b-sides (yes I know this sounds terribly pretentious)
Imagine my utter disappointment when I missed them playing live in Atlanta by 2 days. Stupid job making me miss things that matter to me. Anyway, if I had to describe this electronic/folk-clash/mish-mash/experimental mess, I’d say just what I posted there and that’s it. It’s the kind of thing that makes me happy- a silly folk album with some bad synth accompanying it. HEAVEN. The songs are catchy and full of poppy goodness not un-like The Mountain Goats… if they ever used a bunch of synth.. which they pretty much never do. I love it. I want to marry it, but I’d settle for seeing them live.. just once.
Posted by The Frog Queen at 12:28 PM