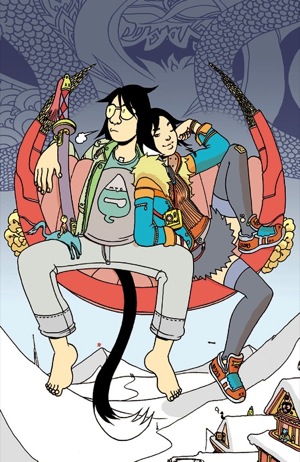 Last night I read Issue #1 of Multiple Warheads : Alphabet to Infinity by Brandon Graham released by Image Comics.  Before I found out that this comic was based on a porn web comic, I opened the first few pages to find landscapes that resembled legs spread open and phallic towers. Kind of funny. I really like this artwork. It’s bright and fun while maintaining an obvious sense of humour that’s echoed in the script.
The story follows a couple named Sexica and Nikoli travelling through what seems to me to be post-apocalyptic Russia? While this is happening, an organ hunter named Nura is charged with finding a character who’s head grows back. I had to look up her occupation since I thought she was a bounty hunter. Apparently, she is known as an organ hunter in the story. I’m sure that would have been made clearer in the following issues which I currently do not have.
There were some really sweet puns and play on words in the scripting. I’d read it for that alone but I actually really do like the artwork. The landscapes are hilarious, harbouring strange faces in building structures and like I mentioned earlier, sexy figures as rolling hills. Yes this has been done before, but the art style is so damn cute! With radiated mutants, talking animals and singing cigarettes, what’s not to like? The first issue definitely makes me want to run out and grab the rest. The release date said October 2012. I’m guess the next issue is out already, good thing I’m headed to a comic book store tonight for board games.
Posted by The Frog Queen at 1:20 PM