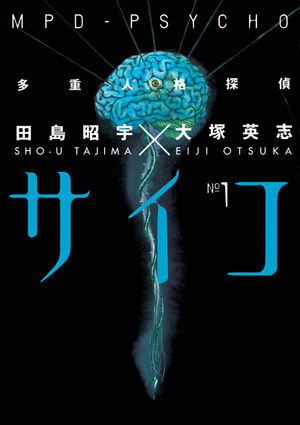 Last week I read the first book in the series called “MPD Psycho” which I got for 80 cents at the Strange Adventures Dartmouth location. This is a manga published by Dark Horse.

Review: gratuitous use of naked, mutilated women. That was my first impression. The whole damn book was mutilated naked women!? What is up with that? Over-done much? It was one of the things I disliked about Dexter.. great story idea; another reason to show violence against women. (I am talking about the first story arc with the ice truck killer. It did improve after that.) I kind of feel like these sorts of stories desensitize us to violence against women and glorifies sexualized violence. I mean, why is the serial killer's anger always directed at the opposite sex? I suppose it’s not ALWAYS the way the psycho story goes, but it does seem more often than not. Am I right or just overly sensitive?

Seriously though, the book seemed to be more about trying to find shocking ways to draw brutalized women, and I do mean it’s shocking. One of the serial killers somehow uses women to become live human plant pots. It’s pretty nasty and honestly paints a grotesque image that makes me squirm.. and not in that good way. The killer removes the skull and somehow lets a seed grow into a plant out of the brain. Not like that could actually happen… I don’t think a brain can survive that long without the top of the skull (not to mention while something is growing in it).. ewe.. thinking about it makes me feel gross. AND THEN, the girls are all naked and in bondage gear!?!? WTF?

But you get what I'm saying. Maybe this is why I don’t read crime novels. With the saturation in the genre, writers seem to have to step out of any sense of a comfort zone to come up with increasingly shocking, homicidal images. Like the torture horror movies to come out over the last 15 years.

I'd say the only interesting part of this story is that the series of killers seem to have one thing in common, they have some odd barcode printed on their left eyeball. Yeah, I don’t get it either. Crazy government body/eye clinic creates serial killers for .. what? Or maybe it’s aliens! Crazy aliens creating an investigative/crime drama to entertain the masses back on their own planet? Probably not, but I think I would actually read THAT book. Only if elephants are somehow implicated in driving humanity to the brink of chaos. Yeah, if anyone has a right to be angry, it’s the elephants. Okay, I've gone completely off topic…
Posted by The Frog Queen at 6:16 PM