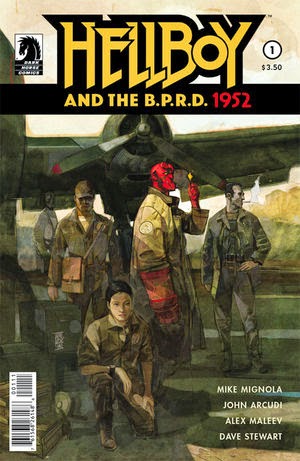 The 8 part series is drawn by Alex Maleev (Daredevil) and colored by Dave Stewart. The duo's art if perfect in the Hellboy universe. John Arcudi and Mike Mignola are both credited with writing the mini series.

How do you feel about prequels? I personally really like them if they are written by the original author. However, I think we're going to have to dismiss Star Wars episode 1-3 in that analogy. Or we could disqualify them as prequels since they are supposed to be the beginning of the series.... let's just hope the continuation is better. #GeorgeLucasRuinedStarWars

Does this qualify as a prequel? Already critics have been describing it as such but Hellboy's early days have been detailed in the flashbacks and memories. This comes at us to celebrate Hellboy's 20th anniversary. Mike Mignola commented to Comicbook.com (yeah I know I don't like them either), that it was perfect for the anniversary and I have to agree although you will hear more from the supporting characters than Hellboy in this opening issue. Regardless, if you're even a little bit of a Hellboy fan, you must be picking this up. It's available now. Thumbs up!