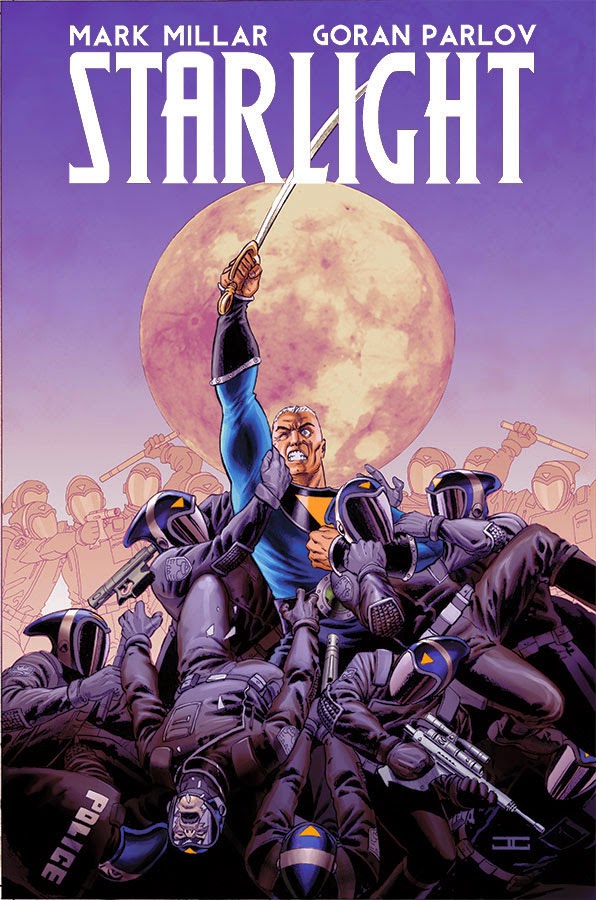 Six issues and it's all over! Mark and Goran are off to do other things. Goran goes off to work on an origins story for the Punisher and Mark goes to further expand the Millarworld. The new Punisher which has not yet been been given a release date, sounds amazing because of Goran. Obviously I'm bias. The series is known to me as The Punisher: Platoon. I'm told it'll end up being around 5 or 6 issues. I can't wait. With Starlight over I'm without the one thing that really made the book stand out for me - Goran's amazing work.

It's those damn pink and blues. The colors pink and blue have been heavily researched by the science type crowd and found to provide comfort to the viewer. Perhaps that is why I love the works created by Parlov, Brandan Graham, Mike Allred.. people influenced by the great Moebius. For me, color has a lot to do with it all but it's not everything... OBVIOUSLY. There is also a lot more going on than color and clearly, each of these artists have a voice of their own. If you can't spot it then please, go back to comic book school. Joking..sort of.

I really wish I could spoil this ending for you but I promised no spoilers suffice it to say the final issue is long. It also pleased me to be as unspecific as possible. I do feel that the series as a whole is suitable for children and now having read it all, I think that I would allow some youngsters to read it. I will be turning over a copy to my sister when the trade comes out and she can read it to her girls if she agrees with me. Perhaps the pink hair of Duke's young friend will have a calming effect? LOL not so sure.

The final issue of Starlight will be release October 22nd at a comic book shop near you!
Posted by The Frog Queen at 10:32 AM