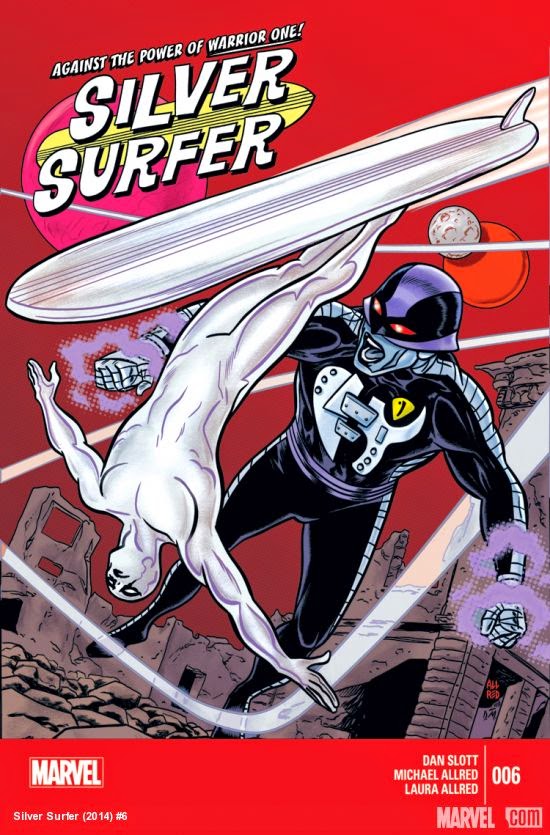 This is really great. I think I giggled on every page. Wait, I'm still giggling...wait... okay I'm done.

So about two weeks ago I did an interview with Dan Slott and asked him about the future of the Silver Surfer and his coming adventures with Dawn Greenwood. He explained to me how Dawn came into being for one but he hinted at future adventures. You can read all that awesomeness right HERE.

Dan gave us some damn good information and as you probably know if you've been reading the series, issue six marks the beginning of a new story arc. So what do they do first? The eat a lot. I mean a lot! The Silver Surfer hadn't really thought about the fact that humans need to eat and use the bathroom quite often. Three meals a day!? WHAT? It's food that leads them to planet Prime where super fun chaos ensues. I won't spoil it because there are plenty of cute gags throughout the whole adventure. It's also the first all-in-one contained adventure I've read in a Marvel comic in a long time. This floppy has a beginning and end so it's make it a great place for people to jump right in and get to know our characters a little before they launch into something that spans a few issues.

All joking aside, and it's difficult to see the panel through giggles sometimes, I think this is my favorite issue in terms of art. My reasoning behind this is due to the action scenes that take place on planet Prime. Again I have to commend Laura Allred for her awesome coloring. I really enjoy the colors all the way through the series. They're so vibrant. Mike Allred's talent which is always on spotlight in the series, really shows in his action scenes with the movement he creates. You'll see what I mean when the surfer runs into the mysterious character on the cover known as Warrior Prime.

I think you'll enjoy the concept created for this strange new Planet. It really does have a sort of silly Star Trek feel to it and speaking as a recovering Trekie (I'm only recovering because I'm still mourning the loss of Janeway, I know that was forever ago), this really appeals to me.

I'm highly anticipating the release of the first trade paper because I really think my nieces would like this. I don't think the perils of space are too scary for them. They're five going on 13 and deadly into superheros right now but then again, who isn't?
Posted by The Frog Queen at 4:31 AM