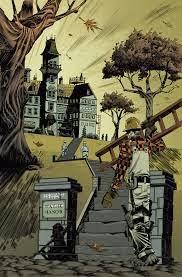 Immediately when I had begun to write the title to this article, I wrote Arkham Asylum. I guess I'm going to be calling it that every time I write about the series which I intend to cover pretty extensively. I received my copy in the mail yesterday and decided I'd wait till today to post my review since it officially hits the shelves this morning here in Halifax, Nova Scotia.

Last night I was super excited to finally take a look at Shawn Crystal's inside artwork for this new on-going Batman series. I contact Shawn last week because after seeing the cover that was just it for me. I know I had to read the series. I loved the released artwork. I have to say I found it sort of funny when I tweeted him to ask for an interview as I was blown away with the cover. He said that he guessed I was looking at Eric Canete's variant cover. I had seen that cover. It's cool, I'm a fan of Eric's work but that's not the cover I was talking about. I was talking about the perfectly timed October release. I felt more dark and Halloween-ey every time I looked at it. I guess Shawn is a bit on the humble side! I was so happy he agreed to talk to me. You can read the interview right here.

There were subtleties throughout the issue that I enjoyed. One such subtlety was the bat silhouette in the narration boxes whenever Batman was speaking. I think it's important to take a look at Batman himself. Shawn Crystal has given him an extremely gaunt look. How old is Batman right now anyway? I don't know. He's certainly Year 100 old but he does appear to be more warn in this depiction.

This issue sets up the story and all the excitement to come. Batman is no longer welcome in Wayne Manor. He lives with Alfred in an apartment in Gotham, but he must go back and investigate now that the inmates have moved into his beloved family home. There's been a murder. I'll leave the spoiler out of this article. I have to give this issue some hands together and maybe a fist pound because its going in a direction that is not simply Batman on the streets. I think it'll force Batman to use more of his cunning and wit. It might force him to use more brute force and not to rely on the typical Batman gadgets we all know and love. Maybe this is a sort of Batman outside of the box.

You should probably just go get a copy and read it right now before I spoil it for you.
Posted by The Frog Queen at 4:15 AM