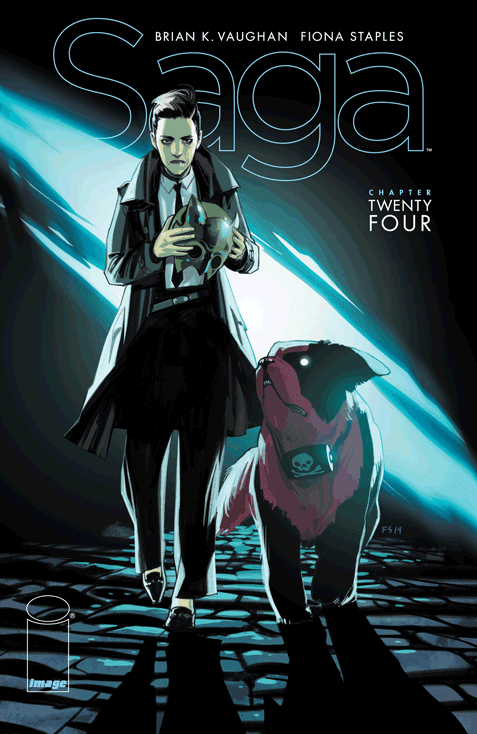 Finally! I was dying to see what was happening with The Will and his crew. His crew has basically ended up as Gwendolyn's (Marko's former fiance) and her crew now that The Will resides in a 24 hour care facility as a "zucchini" (that's a vegetable). It's about bloody time we saw what was going on with these guys.

There were some great panels in this issue. Mainly a stab at a would-be rapist and pedophile alien who was apparently guarding a secret that could help The Will out of his useless state. This all takes place in the first few pages. I read a horrible review on Comicbook.com saying "Staples’ opening pages have developed a reputation for being impactful." Um.. well if you mean that it's full of impact then yeah I agree but you can't be impactful. You can't be impactful because impactful is not a fucking word. ARGH. I read this argument that it's not a word in most dictionaries because most modern dictionaries have no caught up to the creativity of modern speakers. BULLSHIT. It doesn't even roll off the tongue properly. It sounds like shit... anyway... back to Fiona Staples...

I wouldn't say she's known to shock. I would say that Brian K. Vaughan is known for his use of a sort of "misdirection" in his writing. He skillfully draws ones attention in and you think that the story is going there but then BAM! He throw in a good witty line to throw everything for a loop. Appropriately he pans away to another piece of the story. He's done this through Saga many, many times. He's done it in Ex Machina, Y The Last Man, and basically everything he's written. He's famous for leaving you wanting more desperately at the end of every issue.  Staples? She makes it real. She brings it all to life. Let me be clear, I'm not trying to downplay her role as the artist of this story. I just disagree with this awful review on comicbook.com. I feel as though a lot of people reviewing Staples work are actually quite ignorant of the work she's done BESIDES Saga. The reviewer from comicbook.com should really go back and refresh himself with her work...