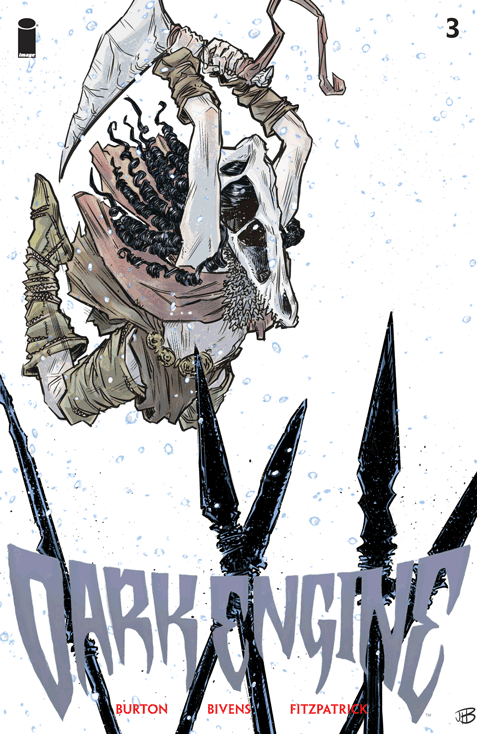 I wanted to write a brief article about Dark Engine. Here's my two cents in regards to what other critics have been saying about the new series. It seems that many people find the series difficult to follow and are unsure what the plot is. I can agree to this only to a certain extent. In a sense, I do find some of the writing, particularly the narration, a little dodgey to grasp. Most of the story is shrouded in mystery and full of cryptic dialog. I don't think that this makes the story confusing.

The nature of floppies makes them somewhat difficult to follow. Picking up and dropping a story every few weeks means a more complex plot can be easily forgotten and become difficult to keep up with. A story such as Dark Engine where the main character has only just spoken for the first time, can be easily dismissed due to the effort involved to keep up. It's come to my attention that comic book readers don't often like to be challenged. Hence some of the lazier readers out there but this is a small percentage, many of crave the challenge of keeping up with 30 monthly titles (and more).

I don't feel as though Dark Engine falls directly into this "hard to follow" category of books. Not only has this series just begun to take us places, but it's only begun to show us the characters true path. Sym is a mystery and so is her journey. I feel that these critics with their need for instant gratification, clear agendas and over explained plot via script, is just taking the fun out of a good mystery. Quite frankly, if I wanted a story explained to me in detail through narration and scripting, I would read Adventure Time, or hell... I'd watch Gundam *eye roll*

John Biven's artwork as I have said in the past, takes me back to a youthful place in the hay day of Heavy Metal Magazine. I've shared these images with people all over the internet because this artwork is so on right now. Although both uniquely their own, Bivens and Riley Rossmo (Hinterkind) are two artists who's style feels perfectly timed with what I want to see in comic book illustration. I personally keep them on my radar for the future as people who's careers are only going to advance more quickly. Keep an eye on Bivens, because I think he's going to be doing some amazing projects in the future and Dark Engine is just the beginning.
Posted by The Frog Queen at 3:55 AM