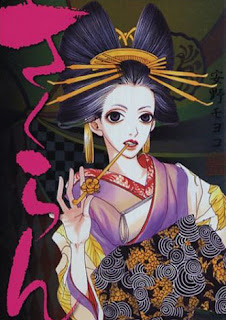 Sakuran originally ran from 2001-2003 in Japan. I picked this up out of nicotine withdraw realizing I needed some trash to keep my mind occupied but not something that would actually take brain power to understand. Brain power is seriously depleted at the moment. I am forgetting how to spell words I have always known how to spell. I am losing my focus mid sentence which makes it hard to say exactly what I want using the right words. Well, it'll soon be gone, it's only day five after all.

Enough of my current state of mind, or lack of concentration rather, let us discuss this beast of a manga. I am calling it a beast because simply, it is a fairly thick volume riddled with trashy scenes and ignorant people.  I find a lot of the panels rather sloppily drawn and rushed. It's not a real polished work if you ask me. Author Moyoco Anno has made a career of manga mostly targeted at elementary school girls and juniors. This is sort of stepping out of that area, the manga is recommended for 18+.

All in all the story is told in a childish manner, yet with adult content. It's memoirs of a geisha without all the symbolism. So it's pretty weak and exploitative. Girl on girl hate. Would I recommend this to anyone?? Um.. no. I wouldn't even recommend it to myself and I picked it up. It did server it's purpose as being devoid of thought. I was able to forget about how depressed I am since I quit smoking. That being said, I will not bother looking for volume 2.
Posted by The Frog Queen at 4:49 AM