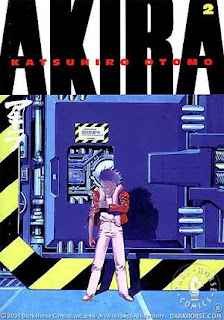 My god. I always thought that I was too stupid to understand Akira (the movie). I thought this because the first time I watched the movie I was like "man this is an awesome fucking movie with a great soundtrack... it reminds me of the soundtrack for Ravenous (written by that dude from Blurr! Except that should be the other way around because the movie Ravenous came out way later than Akira).

I knew that the movie was condensing a lot of heavy content. One cannot help but be confused after watching Akira. Reading volume 2, helps to put it all in perspective. The relationship between Kaneda and Tetsuo is completely different than in the movie, so far as I can tell. I always identified with Tetsuo in the movie (despite naming my second kitty Kaneda).  Basically Kaneda is out to destroy Tetsuo purely because the woman he is obsessed with would rather see Tetsuo dead, but mostly because in volume 1, Tetsuo became the leader of a rival gang... the clowns. What is REALLY Kaneda's whole motivation for destroying his childhood friend? In the book, he doesn't appear to understand that his best friend possesses the power to destroy Neo-Tokyo (and perhaps the world). He's after Tetsuo for his own benefit. Kaneda doesn't look like such a great character after all despite his over confidence and danger dodging attitude. If I met Kaneda in real life, I'd probably punch him the face, yet all growing up, I thought he was awesome in the movies and invented little sexy daydreams based on his character. Fuck Kaneda.

All of Volume 2 centers around is the weird little mutant kids using Kei as a weapon/tool to target Tetsuo. He's escaped from the damn government hospital again and running a muck after Akira who has been buried deep under ground. I'm not getting clearer understand of why this whole Akira kid is so important. I already know he caused the explosion that fucked up Tokyo but I didn't realize he was technically still "alive" in his crazy-ass chamber underground. That shits fucked up. So much is coming together yet I have to order the next volume because I need to know where this is all going.
Posted by The Frog Queen at 6:09 AM