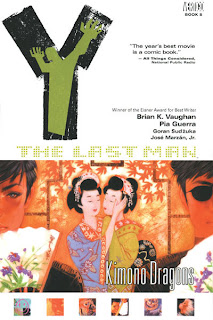 I'm starting to laugh a lot every time Yourick comes up with another disguise idea! They are getting more ridiculous with every volume but it's great all the same.

At this point, Yurick's monkey has been stolen and Agent 355, the doctor and of course Yurick are tracking him by means of a device implanted in the little shit-flinger. I feel like this has all gone the way of Giligans Island heh, the tag-along eye-patch girl gets to be Mary-Anne and Ginger just drowned somewhere in hot-water spring. Agent 355 get's to be the Captain and Yurick get's to be Giligan. Wow, Giligan's Island is crawling with women! Moving on-

Y The Last Man really does have everything, it even has submarines and ninjas! Swords, secret agents, horrible plays.. This book actually opens with another awful production. All the lack of tv has revived theater apparently but I can't help but think Vaughan is saying something about women being the inherently dramatic sex. I mean that is only right if you're THIS girl and on day 6 of quitting smoking. Did I mention I've been a little dramatic lately? MOVING ON-

I decided to blog the three remaining volumes into one post because I read them one right after the other. A lot of theories, ideas fallacies are presented in this whole series. It feels like Vaughan is having an argument with himself through all these random characters. I suppose that's what most authors are doing but with Vaughan it doesn't seem that he's made up his mind. Is he a feminist? Does he even understand what a real feminist is or is he like so much of the population, believing feminism is about female superiority rather than equality? Sometimes I just can't tell with Vaughan but I think he's well meaning. At the end of Book 9, the argument is made once again, that women are jealous airheads that just want to read trashy novels. This character claims it's obvious because since the plague hit and all the men disappeared, women have been running the world into the ground. Things like this always make me laugh since well... it's a fictional world.

As I said, Vaughan is just playing with ideas and opinions that get tossed around feminist forums by trolls and feminists alike. There's always something to be gained by healthy discussion even if the discussion is between a bunch of characters in a comic book. lol.

I think the last book was my favorite despite that fact that I cried through the better part of it. Of course that could have been due to the nicotine withdrawal, or PMS. But I loved it all the way! I want to spoil all of it for you because it was sooo fantastic!! But I can't. You just have to find out for yourself. What happens to Yurick, Agent 355 and Dr. Mann? Hero and Beth? It's all perfect. Now it's all over.