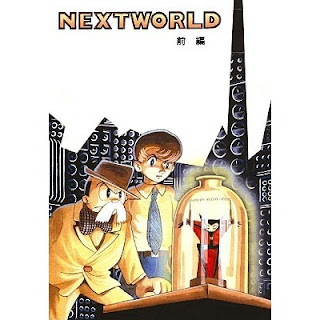 There is an awesome forward by Darkhorse in Nextworld which explains the odd look of  characters other countries, particularly Africa. It addresses the issue of racial discrimination and preservation of historical art/literature. I've made this argument before after reading Tezuka's Black Jack. Apparently Darkhorse agrees with my opinion that despite some of the interpreted disparaging pictorials of African people, the work should be continue to be published in its original form. Reasons for this being that Tezuka was mimicking what he thought was an art style he adopted from the West (at least that is what I gathered). I don't believe he understood the context of the images and that they were in fact furthering racism against non-Caucasian peoples. Darkhorse apparently shares my opinion and has chosen to publish Tezuka's work in it's original form accepting that it is often viewed as offensive.

Anyway, on to talk about Nextworld.  The story is intended to be a parody on the relations between the US and Russia.  It's fairly easy to pick up on this since The Uran Nation wear Ushanka-style headdresses. The premise revolves around the effects of atomic bombing. An island called Horseshoe Island (so named for it's form), has developed wild and new species that are believed to have evolved from atomic radiation. The island was once an experimental ground for atomic blasts. Naturally, Tezuka put a lot of focus on atomic and nuclear war and their effects on the planet. In this case, the two super nations are at war and it appears they must work together to rid themselves of this new species that threatens to destroy humanity. Looks as thought they are calling these creatures the "fumoon".

As usual, you will recognize some of the characters and names. Tezuka was well known for re-using character names as if characters like Rock were reincarnated in a new reality or universe over and over again. Sometimes he merely re-uses their likeness.

This isn't one of the best stories I read by Tezuka, but I understand it's one of his early works, dating back to the 50's. I have volume 2 on order at the Library at any rate. It's a personal goal to read all of Tezuka's work that has been released in English. I will do my best. It may take forever.
Posted by The Frog Queen at 5:06 AM