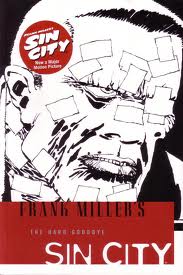 Reading Sin City : The Hard Goodbye for the first time has got my head spinning. In a good way of course. The way that tells me that I've got a lot of stories I have to start putting on paper asap. I've got a lot of comics that I HAVE to get out of me and in front of me instead. Okay but lets talk about this book, we can talk about all the books I haven't drawn & written some other time.

The Hard Goodbye was originally published in 1991. It's always been one of those books I pass over even though I've always wanted to read it. I do this a lot with books. I know I'll always get around to reading it. Frank Miller was nominated for a lot of awards in the early 90's because of this serial. The book itself has won a few awards over the years including the Eisner Award for best reprint. I borrowed this lovely trade paper back from the Library of course. I'm just about to order some of the other stories from the series.

I have only read random issues by Frank Miller in the past and most of them Batman. I know everyone raves about Frank Miller's Batman, but for me, no one does it better than Sam Kieth. But that's not a debate for this article, and I know I'll lose that debate anyway. Frank Miller in my head is a better writer than he is an artist. Okay, before you shoot me, read on. I love the way this particular book is written. I'm not totally crazy about the artwork.Why? Well, because I think I could I am just as good of an artist as Frank Miller. I know, I'm an asshole but seriously, you've never seen my work. No one has really and it'll stay that way till I finish one whole graphic novel. But can I tell a story like Frank Miller? No. I really doubt myself there despite the fact that all I want to do is be a writer. I'm not certain I can pull off a story like this one. It's all too bitter sweet and even if you can't realistically identify with Marv, you find yourself trying to anyway. It's all due to his awesome monologue.

Well, I want to continue to talk about this but I'm distracted by the fact that they are playing the Star Wars Empirical Theme in the Natal Day parade happening up the street. Jesus.. I don't get it. Why are we celebrating WWII with Star Wars? Don't get me wrong, I'm the biggest Star Wars fan. I've got the memorabilia but god damn. What is wrong with Halifax?
Posted by The Frog Queen at 7:16 AM