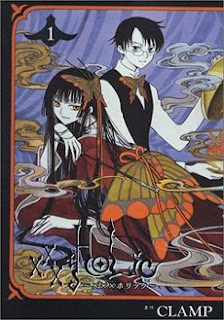 I have liked a lot of Clamp manga over the years. Most manga fans are familiar with Chobits and X. Both titles received some renown in the manga world. XxxHolic debuted in 2003 as a Seinen manga (target audience 18-30yr males) and in 2009 was ranked as the 6th best selling manga in the United States.

Sometimes I'm confused by the target audience assigned to manga. I read things that are not targeted at my demographic and I find that's pretty typical of North American readers. Perhaps it's exactly the same in Japan. I've never been there and I couldn't find any relevant articles online that might explain why certain manga's receive a specific label. I will simply assume that Japan treats the labels as more of a guide for prospective readers.

XxxHolic is a series about a high school boy named Kimihiro. Dude is afflicted with the ability to see the supernatural, which is more than just seeing dead people walking about. Kimihiro seeks help from a creepy lady in a tea shop who claims she can remove the curse. Coincidentally, Kimihiro ends up working in her shop where lots of supernatural happenings are thrown at him.  (Yes I know I'm making even less sense than usual. Day 5 of no cigarettes so cut me some slack bitches. Leave me to my cumbersome sentence structuring.)

The art of Clamp has always baffled me. Pages go from elaborately detailed with intricate design, to downright minimalist and sparse. I remember this observation when reading Clover some years ago. Despite this bizarre approach to panels, the characters are drawn beautifully. Clamp has always had this wonderful hyper feminine styles for faces and bodies. It could be difficult to tell the male and female characters apart if it weren't for their clothing. Like a lot of manga characters however, Clamp is addicted to the excellently tall and slender bodies. That part I don't like so much. Itty-bitty waistlines don't help anyone with body dysmorphia, which I think all of us have at least a little of.

So far I am enjoying XxxHolic and will most likely read the next couple volumes (which I got at Strange Adventures for 1 dollar on Free Comic Book Day). Great deal!
Posted by The Frog Queen at 7:04 AM