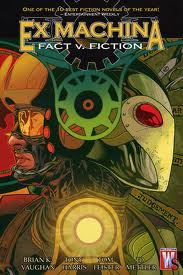 There's a new costume asshole on the scene and he claims to be the invention of "The Great Machine" who is of course, Mayor of New York. Interestingly enough this jet pack wearing masked man wears a costume of bright green. The same color as the mysterious graffiti symbols driving people in the city mad. All that seems more interesting than it is. It turns out that the masked man is actually an experienced cosplay enthusiast and former comic book store owner who is good friends with Hundred's devoted right-hand man.

I can't say there were too many interesting developments in this volume and I wish maybe they had bothered to include just one extra issue to level it out. But there was an exciting trial and a crazy person who claimed that he could hear machines yet not understand them. We get another little piece of the mystery behind Mayor Hundreds' powers.

While I was reading this, I considered what I would do if I was either Mayor or gifted with the power of talking to machines... my mind wanders-shut up. I think as Mayor, Hundred is doing fine. He seems to be just as obnoxiously left-wing as I am and he curses just as much with little to no concern over professionalism. But as a machine controlling super hero.. I think I might try a little bit stronger tactics. How about for instances, shutting down the launch of missiles all over the world. What about gun control ?? (he can actually speak to guns and render them useless). Or how about using his power to create the ultimate machine!! He could tell computers to build a better computer and further technological advancement. Yet that's only possible if we consider that his "talking" to machines implies they are somehow sentient. I don't get all that and it's not really explained much. But hey, this is book 3. Surely some answers will come my way.
Posted by The Frog Queen at 10:01 AM