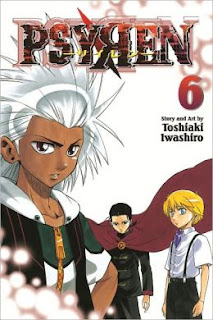 The kids are in trouble again. SURPRISE! We knew that though. There are yet more new characters introduced at this point in the story and the whole plot veers in a different direction for the entire volume. At this point everyone has been transported back to Present Day Earth and has begun to work on their psionic powers. Ageha struggles to try and warn granny and the children about their impending doom. He foresaw in the footage of the future captured on a disc they found in a bunker. However, in his attempt to talk about Psyren to granny who's never actually been there, Nemesis Q shows up and abducts Ageha's consciousness.  It is only at this point that we realize that Nemesis Q is not a being but a program sent by someone from the future to help prevent the collapse of Present Day Earth.

It is here I would like to express some of my distaste for the enthusiastic writer Iwashiro (I say enthusiastic simply because of all his footnotes that are littered with positive vibes and exclamation marks. Quite the diversion from reading notes from the author of Eden).

I appreciate Iwashiro's  ideas; I appreciate most of his artwork but it writing solutions like this where I find myself a little dissatisfied.  The author consistently introduces new enemies while a slew of others haven't even been dealt with and new attributes of psionic energy. That in itself is fine however, the way he simply throws the information at the reader! Where is the build-up? where is the back story for the development of these bizarre powers? It is as if the power was created in order to solve some plot hole the author wrote himself into. In this instance, Iwashiro has made it so that psionic energy and those that wield it, can create psionic programs.... Here is where I'm pissed--The ridiculous concept of a program that is described as an autonomous being that has a physical body, that apparently just appears out of thin air. No one built it, I guess they just thought it?? There's no explanation and apparently it's not a machine...although it looks like a machine. I am so annoyed by this concept that I am not 100% convinced that the actual translation is "program" but some other noun that would more accurately describe WHAT THE FUCK these autonomous characters are. I can get behind all kinds of sci-fi ridiculousness but the fact that the author has mentioned NOTHING about psionic energy being used this way and just let several bad-ass characters throw this fucking shit around...wtf? Additionally the author has introduced countless foes at this point already (who our heroes haven't been able to defeat) why the hell do we need another class of random enemy? SIGH.

There is one other part of the volume that bothered me. Now that our heroes are back on Present Day Earth, there are enemies they must face here too! These enemies apparently have nothing to do with the main focus of the plot - figuring out how to stop the destruction of the world as we know it in 2009. These new enemies are a gang of dudes with psionic powers running a crime syndicate. Again, why do we need this? We've got this whole apocalypse to deal with, why do we need a gangster story in here too? GAH. What the hell are you doing Iswashiro?? If you want to write a gangster manga just do it. Stop using this one manga to satisfy your fickle issues with genre. At this point it's just too late in the game for me to accept that there are this many genres meshed into one comic. Perhaps this is why the series ended after 16 volumes. Seems awfully short for all that our heroes are supposed to accomplish.
Posted by The Frog Queen at 5:26 AM