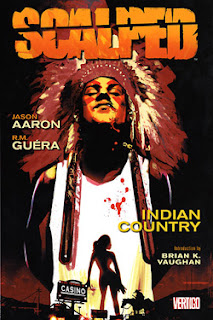 I have been told to read this series so many damn times. I just got it out at the library. I know, I know! My hopping around comic book titles is ridiculous. The way I see it is, you can’t possible read everything as it’s released. I simply can’t afford it so you have to pick and choose what new stuff you have time/money for and then run backwards after the rest once the library gets it. But yes time is just as much of a factor as money. After all, I gotta give the boyfriend some attention. Everything can’t be about comics… or can it? Hmm.

I really enjoyed the first issue of Scalped. It was a refreshing change of pace from my usual sci-fi/fantasy kicks. Everyone knows I like gangsters and I like westerns so why wouldn't I love this book? It's a great mix of the two genres. I'm starting to really like some of the main characters already. We get a few flashbacks that are really interesting which center around Chief Red Crow and cop Dashiell's mother. It looks to me that Dashiell may be Red Crow's illegitimate son despite the fact that Dashiell's mother claims he is the son of another man. I am really interested in Red Crow's daughter Gina who eludes to some illicit love affair involving Dashiell. She seems like she had an interesting past and I hope they dive into that. No doubt really.

As for the story line, all I can tell you is that there is a lot going on at the reserve. A new casino being opened and a lot of organized crime which directly involves the band's Chief. On the other hand we have Dashiell Bad Horse, back on the reserve after a long time away. Apparently he was sent away by his mother as a teenager. Now he's back on the reserve as a cop with one huge chip on his shoulder. He's described as a sociopath but I get the feeling that's not really the case.

As far as beginnings go, I'd say this is a great introduction to a series. You get a little taste of what's to come and a little bit of background on the characters- just enough to keep you guessing. I'll be ordering the second book from the Library.
Posted by The Frog Queen at 5:02 AM