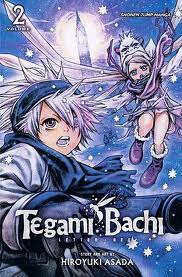 The first 20 pages....pretty difficult to read. I don't mean they were incomprehensible, I mean it challenged my patience because it was so damn boring. It didn't get interesting until Lag Seeing finally made it to the Bee Hive to do his interview. The kid is 12 and really wants to become a postal worker which in this messed up universe is known as a "letter B". (I already poked fun of this when I wrote about the first volume so I'm just going to accept it and move on.)

Lag has to under-go a test which involved simply delivering a letter. He is pitted against a few other candidates, one of which is older and makes his way to the destination ahead of Lag. This is simply due to the fact that he leaves Lag to deal with the obstacles along the way. The obstacles are the Gaichuu, giant insect monsters. In the end, Lag gets his letter delivered but not without it being full of mud and water. The test observer passes his judgement and Lag learns some shocking new about his idol Gauche.

All in all, I believe that the translation is partly to blame for some of the more boring and lack luster moments. Either some of the comedic panels are miss-translated  or the original writer just isn't funny. However, I feel as though it is a translation problem which is often the case in Japanese to English due to cultural idioms. (Hopefully I can say 'cultural idioms' although, is that redundant? Are idioms not inherently cultural?) I'm not the first or last person to complain about these types of translation problems and although translations have significantly improved over the last 10 years, this sort of misinterpretation of cultural idioms remains an issue.

I probably will grab volume 3 despite the boring intro to volume 2. I suspect things may get more interesting. For instance what's with that head Letter Bee?? Don't you think he's kinda sinister?? I kinda do want to see what happened to Gauche.
Posted by The Frog Queen at 4:54 AM