Like A Velvet Glove Cast in Iron by Daniel Clowes 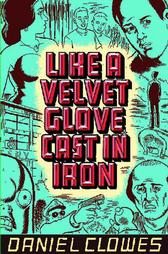 There are not any redeeming characters in Like A Velvet Glove Cast in Iron. In fact, the whole book is told a way which makes it depressing and terrifying. It's like a schizophrenic dream. I assume that the lead character Clay, is simply living his life in a confused delusion. Although he never seems to completely question his surroundings, he looks out-right confused initially, then just accepts it and moves on.

Clowes really doesn't glamorize sex. If anything, he makes it look as unattractive and grotesque as possible. All displays of sexual intimacy have left out the intimacy part and become merely a ritual of necessity in which both who part-take feel nothing but self-loathing at it ends. The book starts out with Clay sitting in a triple X movie theater watching a film called "Like A Velvet Glove Cast in Iron". The entire novel is littered with fetishist, sexual references and scenes. Additionally, characters are deformed or suffering from fictitious and wild illnesses. Mostly, the whole book is just disturbing.

This is one of the most confusing stories I've ever read by Clowes considering it is completely unrealistic. Like I said, it's how I envision schizophrenia to be - confusion, paranoia and acceptance of the unreal. Although, I really don't know much about schizophrenia, this is all based on ignorant assumptions. Sorry.


I think I can safely say I wasn't blown away by this book. It has a pointlessness to it that I don't care for. The only point I got, was that the book leaves you feeling as empty as Clay. Poor Clay, things don't end well for him.
Posted by The Frog Queen at 4:52 PM