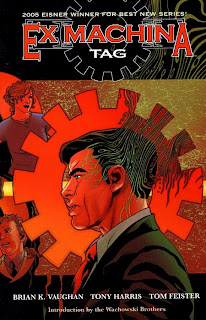 I'm a big fan. Let's just start with that. Mr. Hundred is a great character. "I'm not a conservative or a liberal. I'm a realist." That is how Mr. Hundred describes his political standing. As mayor of New York City, Hundred decides to tackle the issue of same sex marriage. Point - he's going to marry a male couple in front of the entire city. This spurs assassination attempts, and deep loathing from religious groups. Meanwhile, strange green glowing graffiti is popping up all over the city and driving people to suicide, homicide and plain old madness. Things are starting to get interesting. We are starting to understand the nature of this bizarre symbol and it's mysterious power. Super sci-fi things happening? I suspect! Aliens? Secret government conspiracy?? How about time travel?  Well maybe not that last one although the story jumps over a 3 year period. Back and forth, unraveling more of the story behind Mr. Hundred and his strange ability to talk to machines! So exciting!

This is written by Vaughan so you know he's as usual tackling all manner of issues regarding universal equality. Lots of sarcastic remarks thrown around and a good balance of female and male characters. Although I dare say there are more male characters in this book than in comparison to Y The Last Man ;) I know, I'm a smart ass.