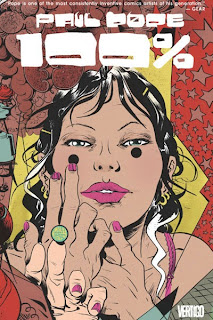 "My Grandma's right! No one worth know'n is out past midnight" terrific line really and not something I haven't heard before but in the back alley's of the inner city.. well it's some advice one should take! Especially in Paul Pope novel. This book is not for children and not for the faint. It's deep and pulls apart one thing we all have something to say about: sex. It's dissecting the experience, explaining the evolution of modern sexual culture and where it may take us. It's not enough to want to see some skin.. it's what's inside. Paul Pope says this by a girl (known as Dollar Bill or Daisy, depending on who you know) losing her diary and the words inside which she so desperately wishes to keep all to herself. Pope says this by showing the same girl expose her insides in another way. It's all so covert. At first I thought she was going to do something with xrays then she lights herself on fire - firejacket. I'm getting a lot of inspiration from this book. Things are breaking loose in my writers mind. Things that have been dead lately. I got the virus.

So communication in this book is called "threading". It's like texting only it does more than texting. Illusions, as far as I can tell. There is an interesting 4D date with John and Daisy. John, has got to be my favorite male character involved in a romantic situation. It's been a long time since I've really like a male character in a book because typically, main male characters tend to be of low character. John is honest, polite and considerate- to a fault really. He places importance on Daisy who is ultimately selfish while being self destructive. Daisy seems to think she's a biological device, not a sentient being with emotions. She boils everything down to biology. 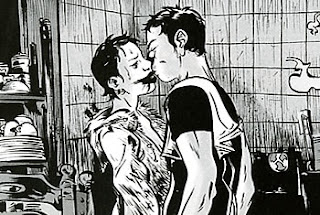 100% issues ran from 2002 -2003 on Vertigo and it's the second Paul Pope trade paper I have read. It's pretty much cyber punk which suits me since I've been writing a cyber punk novel for about 2 years now. My favorite cyber punk novel, in case you are wondering, is Vurt. Read that man...soooo good.

"Why not use the devil's shovel to build a mountain instead?"

Side note : Have you ever seen a picture of Paul Pope? God damn that's one hot comic book artist.